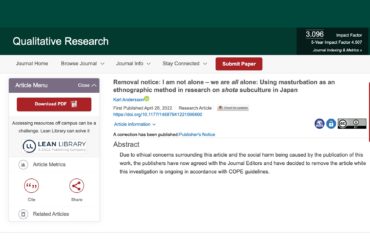 Article was taken down due to ‘ethical concerns’ and ‘social harm’

The notice reads, “Due to ethical concerns surrounding this article and the social harm being caused by the publication of this work, the publishers have now agreed with the Journal Editors and have decided to remove the article while this investigation is ongoing in accordance with [Committee on Publication Ethics] guidelines.”

The removal came shortly following an announcement last week that the paper was being probed by the publisher for ethical concerns.

Paper decried as unethical as well as bad scholarship

The non-STEM side of higher education is just much too big, producing too much that is not socially useful.https://t.co/MPCGU4slLE pic.twitter.com/ctJQYyoa5p

Elizabeth Chin, professor media design practices and at ArtCenter College of Design in California, told Inside Higher Ed that the paper is a “trash fire.”

The “lack of critically engaged conversation about the author’s own sexuality, race and subject position is a huge problem, especially for an autoethnography, and then even more so for a white guy doing work among Japanese,” Chin continued.

Chin “also bristled at the ‘sort of substitution of self for the research subject’ in Andersson’s paper (a highly unusual approach), especially as he reveals so little about his identity,” according to Inside Higher Ed.

“There is no compelling theoretical proposition or argument, and the takeaway is pretty nonexistent,” Chin said. “Seems designed pretty much for shock value.”