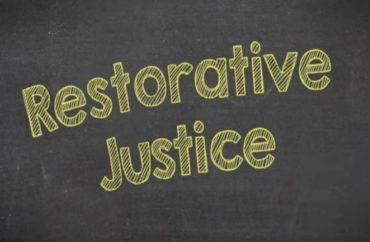 One of the easier things to do these days is pointing out progressives’ brazen hypocrisy when it comes to the meting out of punishment.

Regular readers of The Fix are familiar with education’s fascination with “restorative justice,” an alleged alternative to “punitive” measures for misbehavior and other wrongdoing.

Instead of suspending a kid for telling a teacher to “f*** off” or for slapping another student in the face for instance, administrators and counselors will gather the offender and victim(s) into a confab where they’ll chat about the situation. The offender will get a chance to air what ails him, and (hopefully) he’ll be made aware of what he did wrong.

But if you ask just about any (non-radical) teacher how restorative justice works in practice you’ll likely get a response along these lines: 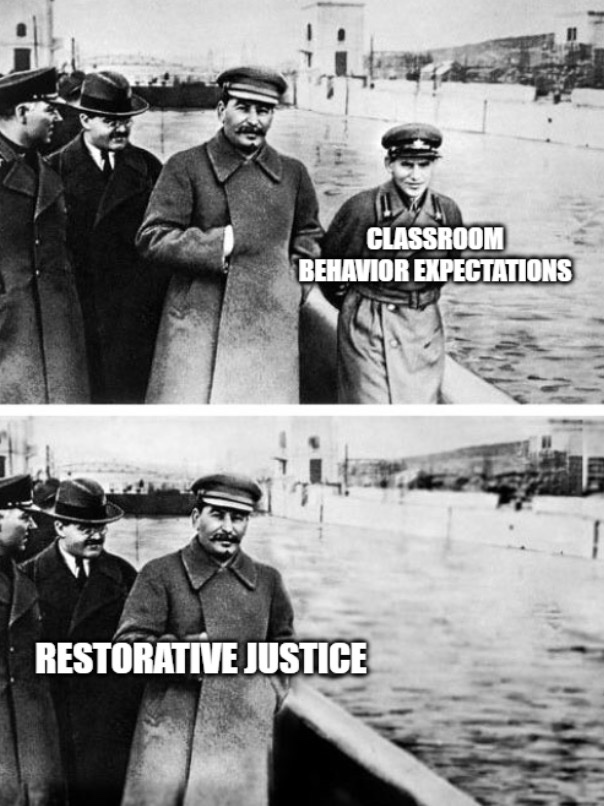 Or, as Chalkboard Review Editor Daniel Buck puts it:

Advocates and administrators: “What do you mean behavior is getting worse?! Suspension rates are down. Restorative justice works!”

The effect is not unlike what we see in America’s big cities today: Cops stop writing tickets and arresting people because attorneys general refuse to prosecute certain crimes and criminals … and then city politicians yammer “Waddya mean crime is out of control?”

The rationale behind this is, of course, “equity”–  specifically the so-called “school-to-prison pipeline.” Apparently suspending (mainly minority) students for egregious behavior is the first step in that pipeline, while for big city prosecutors the issue is making up for past “mass incarceration.”

There’s a distinctive caveat, however: Restorative justice doesn’t apply to the “wrong” people in the “wrong” situations. For example, if you’re a white student who makes a race-based funny or a white academic who engages in wrongthink, you’re exempt from the practice … because white supremacy, history, critical race theory and whatever “-ism” you can think of. (See also: January 6 rioters vs. Summer of 2020 rioters.)

Another “wrong” category is law enforcement. The Syracuse University student paper recently lamented that “over half of [Syracuse Police Department] misconduct reports end with minimally punitive punishments.” After examining over 250 arrests and corresponding misconduct complaints, “the majority of incidents [59%] end with written reprimands or verbal warnings, and officers are rarely suspended for their misconduct.”

Anecdotes include a student who identifies as “Black, Hispanic and white” (huh??) pulled over for blasting loud music and then refused to exit his car when asked by the officer, and a suspect who (allegedly) had been drinking and spit in an officer’s face. In addition, some 70 percent of the noted incidents involved “reckless driving” by Syracuse Police.

Overall, only 6.6 percent of the incidents resulted in a suspension, to which George Mason University’s Laurie Robinson lamented it’s about “the people who you have hired to protect you.”

What’s the big deal though? If we should suspend more of those who have been “hired to protect” us, should we not do the same with students who threaten the learning environment — and safety — of an entire classroom of over 30 young people?

Makes too much, I suppose.