The September 23 event dubbed “Whose Narratives? A Conversation with Leila Khaled” will be led by SFSU Arab and Muslim Ethnicities Diaspora professor Rabab Abdulhadi and Tomomi Kinukawa of the SFSU Women’s Studies department.

According to The Forward, the Arab and Muslim Ethnicities Diaspora, or AMED, is responsible for Khaled’s invitation. 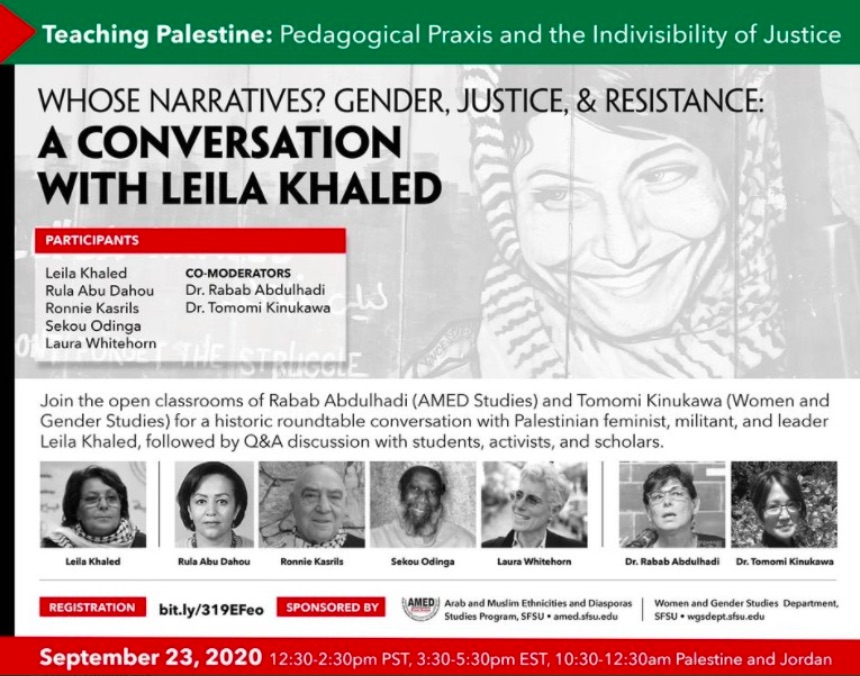 In 1969, Khaled hijacked a plane en route to Israel, and later was captured attempting to hijack a (different) El Al (Israel’s national airline) flight. She eventually was released in a prisoner exchange. Khaled also was involved in attempted terror attacks in the US and Israel.

The Forward reports SFSU President Lynn Mahoney stands behind Khaled’s invitation, who noted it’s not an endorsement of her views.

“A university is a marketplace of ideas, and San Francisco State University supports the rights of all individuals to express their viewpoints and other speech protected by law, even when those viewpoints may be controversial.”

This is not the California State University system’s first Khaled controversy. In May The Forward reported that the Women’s Resource Center at San Diego State University apologized for including a photo of Khaled in its weekly newsletter.

The photo featured Khaled holding a gun with the caption [partially visible in the photo above], “From the river to the sea, Palestine will be free.” It was featured alongside other photo[s].

“Is this supposed to be an acceptable free speech at your university?” StandWithUs founder Roz Rothstein tweeted to SFSU. “An address by Leila Khaled, someone who is affiliated with terrorism.”

The AMCHA Initiative, a Jewish campus education group, called for opponents of the decision to demand SFSU change its policy regarding permitted speakers.

Back in 2016, members of the Vassar College Students for Justice in Palestine sold t-shirts featuring Khaled, or “sweet fucking anti-Zionist gear” as the group put it. One hundred percent of the proceeds went to “organizing Palestinian resistance.”

MORE: SFSU profs use public funds to meet with terrorists