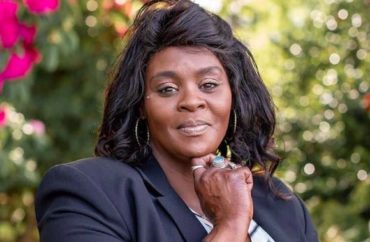 A Washington State school district board has filled a vacancy with an anti-police activist who last year referred to officers as “pigs” and yelled “f*** the police.”

New Olympia School Board member Talauna Reed (pictured) also told an assembled crowd to “tear everything up in this f***ing city” and “tear s*** up” according to Jason Rantz.

“It amazes me how those pigs can sit over there to watch us peacefully talk about what we want [to] change in this state,” Reed said. “It amazes me. And they don’t pay attention until we tear s*** up. So, before I get started, tear everything up in this f****** city until they do what we want them to do.”

At the same rally, Reed alleged that her aunt had been “murdered” by cops; however, the coroner report determined the aunt died from “blunt force trauma to the abdomen, with complications with alcohol,” and police could find no evidence of a crime, The Olympian reports.

“I believe [the police] know something” and that they were “protecting their employee,” Reed insisted.

A 2020 YWCA “Womxn of Achievement,” Reed was sworn in Thursday according to an Olympia School District online announcement. She works with “unhoused community members” at Interfaith Works and “facilitates training in Cultural Diversity, de-escalation, restorative justice models [and] anti-racism.”

MORE: North Dakota school board ditches Pledge of Allegiance due to ‘under God’

Talauna Reed was just appointed to the Olympia School Board. In July of 2021, she railed against cops and called for protesters to “tear everything up in this f****** city.” (WARNING: Language) pic.twitter.com/WgkoUJmvLI

From the Rantz story:

Despite the dangerous, vulgar, and unhinged rant, Olympia School Board Director Maria Flores, speaking on behalf of the board, is looking forward to working with Reed. The district would not confirm whether or not they vetted Reed to the point of being aware of the video.

Instead, it sounds like they are impressed by the fringe activism, citing their appreciation of “her advocacy and experience working with underserved members of our community.”

“The content of Talauna Reed’s answers throughout the process, as well as her advocacy and experience working with underserved members of our community, raised her to the top of the applicant pool and was the basis for our decision. During the interview process she showed herself to be a committed and thoughtful advocate for the students of our school district.