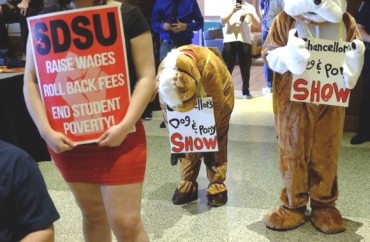 Student activists at San Diego State are the latest to publish a list of demands, and roughly half of the demands involve their insistence that they deserve free stuff and more money.

The 20-item demand list published this week by the “Multicultural Coalition” at SDSU includes (and The College Fix has taken the liberty of boiling down the grievance language to bullet points here):

1. Establish a food pantry on campus, and make the meal plans cheaper;
2. “Redistribute” student government executives’ salaries to the lower ranking members and ease the work load of student government representatives so that more students of color and so-called marginalized students take part;
3. Cancel all new fees and rollback existing ones — but do not cut financial aid;
4. Establish free public parking and free public transit for all students and workers;
5. Make campus health, fitness and arts facilities and services free for all students and workers;
6. Establish a $15 minimum wage on campus;
7. Give teaching and grad assistants a raise to at least $28,000 a year or the equivalent;
8. Freeze all salary increases for administrators;
9. Give faculty a 5 percent raise.

These demands were among the usual ones also on the list: divest from Israel, mandate diversity electives, make campus bathrooms gender neutral, get rid of the “racist” mascot, yada yada yada.

And why do they think they deserve all this? In their words, because “social justice.” It remains to be seen how campus leaders – both students and administrators – will respond to these demands. But one thing is for sure – young people’s growing insistence to be given everything they want on a silver platter without working for it is a troubling trend.

One of the things that makes America great is its entrepreneurial spirit and the opportunity it affords all people who work hard. But far too many young people today rely on handouts, want more for less, and honestly believe they can only get ahead with the government’s help.

We’re slouching toward socialism, and one need look no further than Bernie Sanders’ popularity with millennials to see as much.