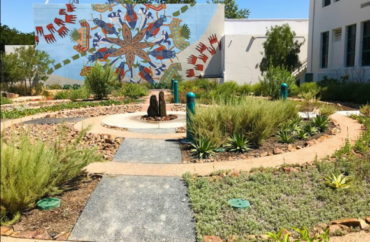 Over a year into the completion of San Diego State University’s racial healing garden, few students, scholars and staff appear to be spending time within its circumference.

The $250,000 Native and Indigenous Healing Garden at the public university was built amid tensions regarding the Aztec warrior mascot, accused of racism, cultural appropriation and toxic masculinity.

The healing garden is meant to honor Native Americans and the Aztec culture “at a time when we need to ‘heal’ over the issue of indigenous identities,” according to a 2018 Aztec Identity Task Force report.

The garden was completed in March 2020. A grand opening fete never occurred due to the onset of COVID.

Campus sources say that, since then, it sits unused.

“I pass it nearly every day I go to my office. It cost a quarter million dollars, and every day, it’s empty,” one SDSU professor told The College Fix on the condition of anonymity.

“There’s not a single person sitting on the one bench they installed. So it’s a quarter million dollars for … what precisely? A garden that nobody visits.”

The College Fix also reached out to the SDSU College Republicans regarding the garden.

“We can say will full confidence that most, if not all, of us at SDSU CR have not noticed the garden being used or enjoyed by anyone,” the GOP group said in an emailed statement.

“It is sad to see such an incredible amount of money spent on something that seems to be forgotten by most of the students of SDSU. This is especially sad because such a project like a garden should foster a positive community environment on campus. We hope to see the university take more steps to encourage engagement with the garden and it’s surrounding area.”

Pictures and videos of the completed garden show it largely lacks user-friendly features such as grassy areas and shade. It includes only one bench. It consists mainly of a spiral sidewalk flanked by native shrubs and rocks.

“The majority of the plants are annuals and will have a seasonal growth period and then go to seed, die down, and return as new plants while the trees and shrubs will grow larger over time and create a space reflective of the natural environment,” according to the university’s website.

Question left unanswered include whether there’s plans to host events at the garden in the near or far future and if any classes or outside groups utilize the garden in any way. The campus spokespersons also did not answer a question about the cost to maintain the garden annually.

In Spring 2021, the garden did play host to a concert to promote environmentalism.

According to the university’s website, the garden “embodies the symbols and plants of life and of healing – physically, mentally, and emotionally.”

The College Fix asked the professor who passes the garden daily if medicinal marijuana is being grown among the indigenous shrubs.

“At least if they grew pot, it would have a use,” the professor replied.