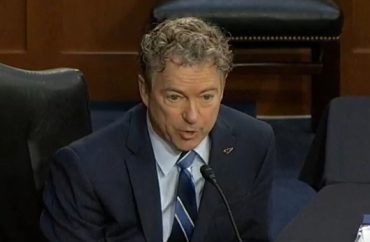 Paul compared puberty blockers to genital mutilation and said the government should not be able to override parents who want to stop their children from taking the drugs.

“American culture is now normalizing the idea that minors can be given hormones to prevent their biological development of their secondary sexual characteristics,” Paul said during Thursday’s committee hearing for Rachel Levine.

Levine, who identifies as transgender, has stated numerous times support for children taking medication to stop puberty. Levine is a pediatrician by training and is also the secretary of Pennsylvania’s health department. The Kentucky Republican is also a medical doctor.

Levine twice did not directly answer the Republican’s question. Instead, Levine said if confirmed, HHS would work with Paul’s office on the issue.

“I’m alarmed that you won’t say with certainty that minors should not have the ability to make the decision to take hormones that will affect them for the rest of their lives,” the senator said.

Levine again repeated that transgender medicine is “complex and nuanced.”

“The question is a very specific one,” Paul said. “Should minors be making these momentous decisions?”

She said that “internet influencers” have convinced many teens to transition to the other gender.

“Parents use the word ‘cult’ because there are many influences that encourage you to cut off your parents, especially those found online,” Shrier told The College Fix.

“The internet influencers very often give the advice that if you’re parents aren’t agreeing with your self diagnosis — and even some therapists say this — you should cut them off,” Shrier said.