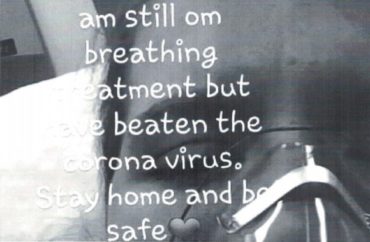 Sharing her diagnosis was like ‘screaming fire in a crowed movie theater,’ sheriff says

The absence of widespread antibody testing means that we have little idea how many people have been infected by the novel coronavirus and recovered from COVID-19, the illness it causes.

That’s left many medical professionals with only educated guesses as to which people who test negative for the virus may have already had it.

A federal lawsuit claims that a Wisconsin sheriff did the bidding of a school district by threatening to arrest a high school student and her parents unless the girl took down an Instagram post (above) claiming she had contracted the virus and “beaten” the infection.

The family’s lawyers at the Wisconsin Institute for Law and Liberty claim that Amyiah Cohoon “developed a severe respiratory illness in March after a spring break trip to Florida”:

After one visit to a local hospital, her symptoms worsened and she ended up at a hospital in Madison. Amyiah tested negative for COVID-19 in Madison, but doctors told her that she likely had the virus but had missed the testing window. Amyiah posted updates to Instagram about this experience, including a post after she returned from the hospital that she had “beaten the coronavirus.”

The lawsuit explains that her mother Angela took her to the emergency room March 22, a week after her return, because she was having “difficulty breathing” following other possible COVID-19 symptoms.

The doctors couldn’t test her for the disease “due to the criteria at the time” and sent her home with her parents, instructing all three to “strictly self-quarantine and to return if her condition deteriorated.” They gave her an inhaler as well.

The discharge order diagnosed her with “[a]cute upper respiratory infection, unspecified,” and the “work release form” called her symptoms “consistent with COVID-19.”

Amyiah’s mother left a voicemail with her band teacher, who supervised the spring break trip, so the school could warn the families of other band members. The girl posted to Instagram that she “wont be back for a while longer due to me no[w] having the COVID-19 virus.”

(A subsequent post about being “in the ER” was automatically deleted within 24 hours, the suit says, explaining its absence in the record. The final post, stating she had “beaten the coronavirus,” is gone because Amyiah complied with the police officer’s order to delete it or face arrest.)

The girl went back to the hospital three days later with “significant difficulty breathing,” where mother Angela got a call from the principal about “an unrelated matter.” The principal promised to follow up with the band teacher about the voicemail, but neither has told her whether they notified the parents of other students on the trip.

Once she was finally allowed to be tested, on March 25, the test came back negative “but the doctors told the Cohoons that Amyiah still likely had COVID-19 and had missed the window for testing positive.”

The day after Amyiah returned home and posted on Instagram that “I am still on breathing treatment but have beaten the coronavirus,” Marquette County Patrol Sergeant Cameron Klump visited the family to convey orders from Sheriff Joseph Konrath. The officer said the “superintendent” – apparently referring to Westfield District Administrator Bob Meicher (left) – had “complained” to Konrath about the “beaten” Instagram post. He had “direct orders” to “start taking people to jail,” including Amyiah and her parents, if she didn’t delete the post. The given charge was “disorderly conduct.”

Klump refused to look at the evidence of Amyiah’s diagnosis offered by her father Richard, who told his daughter it was her choice whether to delete. She deleted it.

The family learned soon after that Meicher, the administrator, had notified families that “a rumor” was spreading that “one of our students contracted Covid-19” on the band trip. Meicher wrote:

Let me assure you there is NO truth to this. This was a foolish means to get attention and the source of the rumor has been addressed. This rumor had caught the attention of our Public Health Department and she was involved in putting a stop to this nonsense. In times like this, the last thing we need out there is misinformation.

While he’s not a named defendant, Meicher worsened the unconstitutional chilling of Amyiah’s speech by calling her a liar in front of her peers and teachers, many of whom likely knew she was the student mentioned in the letter because they had seen her Instagram posts, the suit claims:

With the threats of law enforcement looming over her head, Amyiah has felt unable to respond on social media to Meicher’s allegations, and she is now afraid of returning to school for fear of what her classmates and teachers will think about her. In response to the family lawyers’ demand letter, Sheriff Konrath (right) has refused to admit he violated the girl’s rights and provide “written assurance” that his office won’t do it again, including threats to jail her family, the suit says. Konrath claimed that her Instagram post, based on her doctors’ diagnosis, was the same as “screaming fire in a crowed movie theater.”

Amyiah continues to “reasonably” fear that Konrath’s office is monitoring her Instagram account, and that another officer may pay her family a visit “if she posts anything in the future about her experience, or responds directly to Meicher’s accusations.”

Konrath’s office lacked the “probable cause” to threaten to arrest the Cohoons for their daughter’s speech, which was “unquestionably” protected by the First Amendment, making the threat “retaliatory.”

Protecting social media from legal punishment is especially important “during the ongoing pandemic and stay-at-home orders,” the suit argues:

Amyiah’s protected speech on Instagram was not only a “motivating factor” behind Sheriff Konrath’s and Sergeant Klump’s threat of citation or arrest, it was the entire basis for their threats; Sheriff Konrath sent Sergeant Klump to the Cohoons’ home with direct orders to make Amyiah remove her posts and to cite, arrest, and jail her or her parents if she did not comply.

The “disorderly conduct” law cited by Klump when he visited the Cohoon’s doesn’t apply to her conduct, not even the prohibition on conduct that “tends to cause or provoke a disturbance,” because the state supreme court has already “squarely held” that the law doesn’t reach constitutionally protected speech.

The suit asks for a court injunction against Konrath and Klump from threatening to cite, arrest or jail the Cohoons “for exercising First Amendment rights, including on social media,” plus nominal damages.

Read the press release and lawsuit.