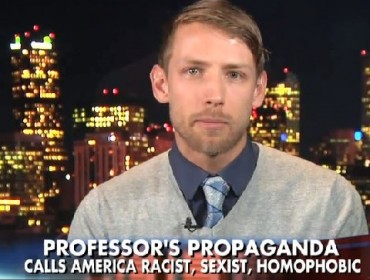 The story was bad enough as is: a Metropolitan State University-Denver professor forced his students to recite what he called a “New Pledge,” which called America racist, sexist, homophobic and more.

But then the brave student-whistleblower who brought this forth, freshman Steven Farr, gave an interview to Fox News on Wednesday in which he explained how the professor not only had his students say the pledge in class – but when they weren’t saying it loud enough – stopped them and had them start over again in louder voices.

“Just upon seeing the pledge I was appalled,” Farr told Fox News. “As soon as he had us read the pledge or recite the pledge, I was seething. I just couldn’t believe what was happening, to be honest.”

I pledge allegiance to and wrap myself in the flag of the United States, against anything un-American, and to the Republicans, for which it stands, two nations, under Jesus, rich against poor, with curtailed liberty and justice for all except blacks, homosexuals, women who want abortions, Communists, welfare queens, treehuggers, feminazis, illegal immigrants, children of illegal immigrants, and you if you don’t watch your step.

In a statement to Fox News, Metropolitan State University-Denver President Stephen Jordan said he has initiated an inquiry, and that “MSU Denver is looking at the situation from both the perspective of the students’ First Amendment rights and the faculty member’s right to academic freedom.”

Farr said he spoke with the president’s office on Tuesday and “they seem genuine in their efforts to have a fair inquiry into this.” But, he told Fox News, he doesn’t buy into this notion that the professor was operating under academic freedom.

“As far as the professor’s First Amendment rights, you have your right to tell your opinions, but you can’t present your own political opinions as the correct answer or the correct alternative to other ideas out there,” Farr said.

On multiple occasions during the course of the semester, Farr challenged Professor Angeletti, and “there were several instances where I disagreed with him and had much to say against his line of thought,” the freshman said. “At one point I asked him if his class was going to be at all objective, or just his subjective political opinions, to which he told me his class would be entirely subjective.”