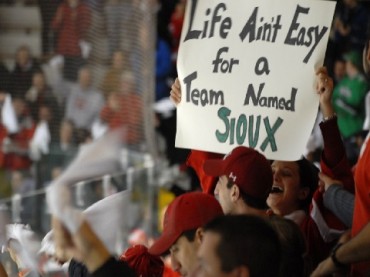 The Gamma Phi Beta sorority at the University of North Dakota has apologized for what has been deemed an “insensitive” and “offensive” display of school spirit, and its members face sensitivity training and possible sanctions.

But some on the campus quickly dubbed the banner “insensitive,” including UND President Robert Kelley, who chided the young women for putting it up during the university’s “Time Out Week,” a campus-wide celebration of Native American culture and history. Making matters worse, the Gamma Phi Beta sorority house is next to the American Indian Student Services building. “The banner and the timing of the banner … demonstrated a lack of sensitivity,” Kelley wrote in a statement. “I do appreciate that the banner was quickly removed. UND has a long-standing respect for the rights guaranteed by the First Amendment, which we teach in many of our academic programs. Along with that, we have a critical responsibility to promote respect and civility within our campus community.”

In a statement posted on Facebook on Wednesday, UND’s Gamma Phi Beta chapter apologized for the “lack of respect displayed by hanging an insensitive banner” outside their house.

“We cannot express to you how terrible our members feel that our actions have caused so many hurt feelings,” the statement continued. “We are aware of the negative feelings this has caused and would like to offer our assistance to help take a stand against future insensitivities on our campus.”

However the apology will not be enough.

In a statement released Tuesday, the national Gamma Phi Beta organization condemned the banner and apologized to the UND community, promising to “provide sensitivity training … on the importance of cultural appreciation,” and adding they may impose sanctions on the UND chapter.

The University of North Dakota retired its “Fighting Sioux” nickname and Indian-head logo in 2012 following criticism from the public and the NCAA, which deemed it offensive.

But the lack of a UND mascot in this week’s Frozen Four has not gone unnoticed by the sports world, either.

In a story published Thursday on Philly.com headlined “ ‘Fighting Sioux’ debate leaves University of North Dakota nameless in Frozen Four,” students and alumni of the university told the news organization that “the consensus seemed to be that the (mascot) issue was sensationalized by outsiders; that those in the community felt the logo was always used in high regard, and admit that it was pitfalls on the part of a few students that toxified what was supposed to be respectful, such as a ‘cowboys and Indians’ party held in 2008, and a banner put up on campus this past weekend reading, ‘You can take away our mascot but you can’t take away our pride!'”

The same sorority that put up the banner this week was the one that hosted the “cowboys and Indians” party, the Associated Press reported.