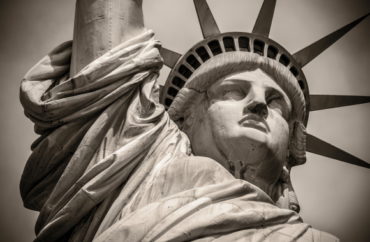 A 13-page language guide at Stanford University warns against, among many things, using the word “Americans” because the term “often refers to people from the United States only, thereby insinuating that the US is the most important country in the America.”

“Americans” is one of dozens of words and phrases listed in the “Elimination of Harmful Language Initiative,” which came under scrutiny this week after it was brought to light by The Wall Street Journal on Monday.

The university hid the guide behind a password after it started getting media attention, but the Journal saved a copy.

Its editorial scorched the university for guide, which editors argued is so “stupid” — one of the words on the naughty list — it’s hard to believe it’s not satire:

You can’t “master” your subject at Stanford any longer; in case you hadn’t heard, the school instructs that “historically, masters enslaved people.” And don’t dare design a “blind study,” which “unintentionally perpetuates that disability is somehow abnormal or negative, furthering an ableist culture.” Blind studies are good and useful, but never mind; “masked study” is to be preferred. Follow the science.

“Gangbusters” is banned because the index says it “invokes the notion of police action against ‘gangs’ in a positive light, which may have racial undertones.” Not to beat a dead horse (a phrase that the index says “normalizes violence against animals”), but you used to have to get a graduate degree in the humanities to write something that stupid.

The Journal goes on to make a very strong point: this is what happens when a university maintains 2,288 faculty and 15,750 administrative staff for a student population of 16,937 students, as is the case at Stanford.

The guide states its goal is to eliminate “harmful language, including racist, violent, and biased (e.g., disability bias, ethnic bias, ethnic slurs, gender bias, implicit bias, sexual bias) language in Stanford websites and code,” as was developed by the IT Department.

Other verboten phrases are “blind study” and “blind review.” Instead use “anonymous review,” the guide states, because using the word blind furthers “an ableist culture.” The words crazy, clumsy, dumb, insane, lame, retarded, OCD and spaz are also in the no-go zone.

Phrases such as “bury the hatchet,” “low man on the totem pole,” “on the warpath,” “spirit animal” and “pow wow” are also warned against: “Culturally appropriative language misuses terms that hold meaning to a particular culture in a way that often lacks respect or appreciation,” the guide states.

Similarly, “exclusionary” gender-based words and phrases include, according to the guide: “balls to the wall,” “you guys” and “ladies” and “gentlemen.”

Fox News reported on additional warnings in the guide:

The institutionalized racism section says to avoid using words like “black hat,” “black mark” and “black sheep” because of “negative connotations to the color black.” It also says to avoid using “grandfathered” and use “legacy status” instead, because of “roots in the ‘grandfather clause’ adopted by Southern states to deny voting rights to Blacks.”

The index also advises against using language with “violent” words included. These terms include “beating a dead horse,” “pull the trigger,” “trigger warning” and “killing two birds with one stone.”

This is not the first time the word “American” has come under fire in a university language guide. In 2019, Colorado State University’s Inclusive Communications Task Force had deemed the words “America” and “Americans” non-inclusive.

In 2015, a “Bias-Free Language Guide” posted by the University of New Hampshire declared the word American “problematic.”