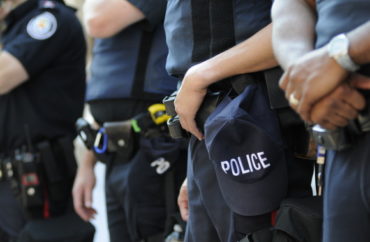 Stanford University recently rejected calls to sever ties with the Santa Clara County Sheriff’s Department and instead extended its agreement with the law enforcement agency.

The decision drew condemnation from campus activists who have been working to minimize police presence on campus.

“It is with great disappointment and frustration that we learned of the University’s decision to extend its contract with the Santa Clara County Sheriff and that we see demands from campus organizations on changes to policing ignored,” the Committee for Change wrote in an open letter published in the student paper The Stanford Daily.

Farnaz Khadem, the university’s media relations director, did not respond to multiple emailed requests for comment from The College Fix on the decision-making process the private university used to renew the agreement and the nature of the relationship with the sheriff department.

Recent demonstrations, statements, letters, and campaigns from the campus community are direct indicators of the deep flaws in Stanford’s approach to policing and public safety. By maintaining the current manner of policing on campus, Stanford dissuades outstanding BIPOC students and faculty from applying to its programs or positions in its failure to cultivate a safe and welcoming environment.

“We wrote it to support the authors of that first letter and to emphasize campus support,” Dixie Blumenshine said in an email to The Fix, explaining the open letter. Blumenshine works as a staff member in the Obstetrics and Gynecology department at the Stanford medical school.

Blumenshine did not respond to a follow-up email asking if her group had any further actions planned to push for its agenda.

The letter Blumenshine wrote came in support of a previous letter, signed by over 1,500 students, staff and professors at the university in support of removing non-Stanford police from campus.

That letter, which came out this summer when police defunding efforts spread in the wake of George Floyd’s death, demanded a defunding and disarming of campus police and ending agreements with other police departments.

“There is no need for non-Stanford police on campus,” petition signers said. Signers included the Black Student Union and the Black Law Students Association.

Stanford has its own police department, over which Stanford University has more direct control. Further, we call for the disarmament of all Stanford police. They have no reason to carry firearms, and it increases the chance that deadly force will be used.

Prior to the November 18 letter, a group called Abolish Stanford held a series of events promoting police abolition.

From Nov. 9 to Nov. 13, Stanford students held a “week of action.” The week included events such as a “State of Campus Policing Teach-in,” a “How not to call the police” lecture, and a “virtual day of action.”

The goal of the webinar, according to the YouTube description, was to “focus on the importance of abolition generally, and Stanford specifically, in solidarity with communities across the country.”

“We’re actually like thinking about creating a world where prisons and policing and surveillance don’t seem like such a common sensible solution and actually seem like a crazy solution that ultimately just causes more harms to the communities and people that we care about,” Mendoza said on the webinar.

When asked why people are fearful of the abolition of police, Clair told the panel, “we do force police presence in marginalized communities right, and so these fears of abolition are really unfounded. There are other ways to deal with social disagreement and social problems.”

He said that higher education institutions should be teaching students “to learn about society, about life, about many different things.”