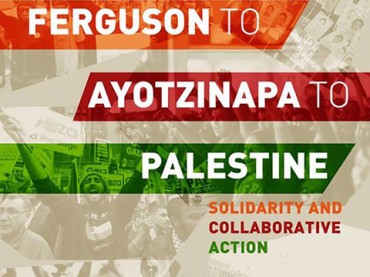 You blindsided us with Palestine addition, museum counters

ST. LOUIS – An event billed as “an opportunity to learn about the parallels” between state violence in Ferguson and Palestine was cancelled by its host, the Missouri History Museum, after student organizers claimed the museum gave them an ultimatum to remove the event’s Palestinian speakers.

The museum shot back that organizers initially pitched the event without any mention of Palestine, and said it feared that its reputation would be harmed under the format the students wanted.

Scheduled for last Thursday, “Ferguson to Ayotzinapa to Palestine: Solidarity and Collaborative Action” was organized by a group of Washington University students known as AltaVoz.

The two-hour event, to be housed at the St. Louis museum, was scheduled to include panel and roundtable discussions with speakers from four local social justice organizations, which included the Saint Louis Palestinian Solidarity Committee.

Organizers and demonstrators took to the museum grounds Thursday evening in protest of the event’s cancellation.

Around 75 protesters gathered on the museum steps, Washington University’s Student Life reported, with many holding signs, some of which read “STL Jews stand with Palestine” and “They tried to bury us.” Protesters also took to Twitter, using the hashtag #SelectiveHistory.

On the step of the Missouri History Museum pic.twitter.com/OonMVlaCNB

In an email to The College Fix, an organizer with the Palestinian group, Sandra Tamari, said the protest highlighted that “censorship has no place in a publicly-funded institution.”

“This incident is part of a larger context of silencing Palestinian voices,” said Tamari, who implied this incident was another example of American supporters of Israel replicating “systems of repression to hide the truth of Israel’s apartheid systems from the American people.”

Organizers only learned the event had been cancelled Tuesday, St. Louis Public Radio reported. The museum said on Twitter the next day it had “heard your concerns” about the event, and linked to a statement.

In its original statement Wednesday, the museum said the event “no longer resembles the original concept the Museum agreed to co-host.” It also stated the event’s organizers had “to fulfill the original agreement or find another location.”

It referred to an email from event organizer and student Sourik Beltran to a museum employee that proposed the event, then titled “From Ayotzinapa to Ferguson.” Beltran said the event’s purpose was to “draw parallels between state violence here and in Mexico,” but made no mention of Palestine.

Beltran told Student Life the museum wasn’t telling the full story. He and other organizers contended they made clear in multiple emails to museum staff the Palestinian addition to the event.

According to Student Life, a museum organizer emailed Beltran on March 4, saying “I love the flier.” The flier attached to the email included the full name of the event.

Organizers noted the museum advertised the event on its website under its full name.

.@mohistorymuseum organizers clearly conveyed addition of Palestine. Clear enough for you to list on your website? pic.twitter.com/S4Vu3mpWRF

The museum modified its original statement Friday. In the updated statement, the museum acknowledged it was “initially open to the changes and posted information about the program on our website.”

“However, after much consideration we decided the complexities of this issue could not be adequately addressed in this format,” the statement read.

The museum thought the focus on Ferguson would be diluted by the Palestinian addition, according to its updated statement.

It’s planning a “moderated panel discussion” on Palestinian and Israeli history that will “include the plurality of voices that we believe is needed to adequately address the complexities of these historical events,” it said.

Failed to see the event was ‘shape-shifting’

The museum said it was not “silencing anyone,” contrary to protesters’ claims.

“We just want to have oversight over events we co-host in our space. When a community partner comes to us with an idea for an event, looking for us to partner and provide a free venue, we have the right to request changes to the program to ensure our standards are met,” the statement read.

Francis Levine, the museum’s president, told St. Louis Public Radio the event was cancelled because of poor planning and miscommunication among staff and organizers, not over the addition of Palestinian activists.

Levine did imply the event’s amended focus played a part in its cancellation: “I think our museum was focusing on Ferguson for so long that they didn’t see that this event was slowly shape-shifting to something different.”

Levine suggested to The St. Louis Business Journal that the event would be better suited on the campus of its organizers.