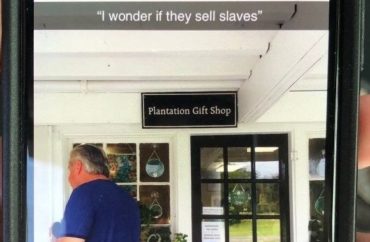 ‘All pretext in their mission to squash diversity of thought’

A conservative student senator narrowly beat a censure vote that stemmed in part from his call for restraint and due process in a racially charged incident.

George Washington University’s Jake Corsi was charged with “creation or continuation of a hostile environment” and “dereliction of duty,” including for his response to a Snapchat photo of a “plantation gift shop.”

Alison Janega, a sorority president at the time, had written the caption “I wonder if they sell slaves” on the photo she posted (above), causing outrage at the private university. The Student Association banned the campus newspaper from covering a “black student community forum” in response to the photo.

Corsi’s colleagues faulted him for dismissing Janega’s caption as a “crude joke,” criticizing the “segregated” forum called in response, asking a fellow senator to remove a Chinese Communist Party flag from a meeting, and failing to meet requirements in his leadership of a special committee. A student senator also allegedly said Corsi’s comments had driven her to resign.

But the censure vote against him failed, The GW Hatchet reported Tuesday: The 22 votes to censure him for a “hostile environment” fell short of the 24 required by the Student Association’s governing documents.

The memorandum issued after the vote (below) incorrectly said the censure was approved, based on a misreading of the constitution’s two-thirds requirement for approval. Corsi told The Fix he informed the Senate that the threshold was based on the full Senate membership, not the members present at the vote, and it was “forced to drop the conviction.”

In an email to The College Fix last week, Corsi called himself “one of the few openly conservative senators” and blamed the charges on his response to the Snapchat controversy.

He shared the charging document and “the ‘evidence’ accepted by the Kangaroo court,” as well as the memorandum in his defense. The memo was written by law student Maggie O’Brien, the Student Association’s vice president for graduate student policy.

An earlier document written by another senator, Brandon Hill, laid out even more charges against Corsi and provided 10 pieces of evidence, the Hatchet reported. Among them: He left a required diversity training because it was “too damn hot.”

When Hill issued an updated list of charges to Corsi Nov. 13, he responded that Hill was a “clown.”

Corsi questions the legitimacy of the proceeding and motives behind it. “They proceeded on a crusade to censor and or impeach me, and have spent the last two months attempting to demonstrate that I create a ‘hostile environment,’” he told The Fix. “All pretext in their mission to squash diversity of thought.”

Before the failed censure vote, Corsi said he would seek to “involve our student code of conduct department” so that “[a]ctual adults would be in charge of evaluating Hill’s claims.”

The Snapchat-related charge cites Corsi’s response to a Sept. 5 Facebook statement by SA leaders condemning the “racial insensitivity” of Janega’s photo. He replied to the Facebook post: “Targeting a fellow student and [a registered student organization] without all the facts over a crude joke is abhorrent.”

It also cites his comments at a Sept. 9 student government meeting. (Senators initiated censure proceedings two weeks later, but “bylaw inconsistencies” delayed the vote until this month, the Hatchet reported.)

According to the meeting minutes, Corsi said he was “appalled” by “the recent targeting of a student on campus” for what he again called a “crude joke.” In contrast, “I went through the crime log on campus – we’ve got sexual assaults, we’ve got thefts, even violence, and not a single student government response of ‘this student is bad,’” he said.

He also criticized the university for suspending all sorority social events and “informal” recruitment in response:

I think we have a very small minority of students holding certain leaders on campus hostage. I think sometimes people need to take a deep breath and actually look at the issues and comes [sic] to a reasonable response.

In response to Hackett’s email announcing that the forum was “for the black student community only,” in order to “keep this space as comfortable as possible,” Corsi wrote: “With all due respect, if you want to hold segregated events then have them off campus. You’re either DIA for all students or not.”

Corsi’s response reportedly triggered Caroline Beason into resigning as senator. She can’t make a “positive impact” in the SA because of “the persistent toxicity and disrespect that have become normalized within this organization’s culture,” Beason wrote in a resignation letter.

Though the letter doesn’t mention Corsi by name, the charges say he deprived her of participating in “co-curricular activities,” as verified by Beason to unnamed members of the SA.

The charges also blame Corsi for “misrepresenting facts” by calling the black-only forum “segregated.” Another senator picked up on the theme and called the forum “pro-segregation,” the document says: “Spreading false information could cause unnecessary discourse within the GW community” and violates the code of conduct.

The evidence cites Corsi’s criticism of the Implicit Association Test, which is used to measure bias but has been widely criticized as unreliable. The administration had asked senators to become familiar with the IAT.

MORE: Even liberals challenge the reliability of the Implicit Association Test

“This shows a pattern of behavior of not learning about and interacting with the issues that are being faced by the people who he represents as well as a lack of respect for the mandatory trainings in place,” the charges read. Senators believe it represents “his lack of interaction with diversity and inclusion education.”

An extended section of the Oct. 28 SA meeting minutes shows Corsi asking another senator, Haining Bao, to remove a “Soviet flag” from his desk: “I think it brings shame upon the Student Association to have a flag that represents millions of deaths.”

Bao responded that it was the flag of the Chinese Communist Party, but Corsi thought it was still inappropriate: “If you’re going to be debating that, I really recommend you speak to a victim of communism.”

Challenged on why he was going after Bao’s “nationality,” Corsi pointed to the “bar and sickle” on the flag: “You’re saying the Soviet flag which represented communism, the most violent ideology on this planet, you think that represents ethnicity?” The charges accuse Corsi of having “derailed” the meeting.

‘These exhibits were strewn together in an intentional attack’

The Nov. 18 memo written in Corsi’s defense by Maggie O’Brien, the law student, said Senator Hill’s document included charges that were added after the Senate vote to start proceedings.

The exhibits “constituted conduct from both before and after the Senate had voted to censure Senator Corsi,” it says: “These exhibits were strewn together in an intentional attack against Senator Corsi without actual proof of the conduct alleged in the charging document.”

Hill hasn’t shown how his evidence establishes that Corsi “violated any provision” of the SA constitution, bylaws or code of student conduct. O’Brien pointed out the lack of detail and corroboration in much of the charging document.

For example, it’s not explained how Corsi’s skepticism of the IAT’s validity – for which he supplied “academic support” – shows a “lack of respect for diversity and inclusion overall.“

The Senate and Hill “have discriminated against Senator Corsi for his political beliefs,” which are out of whack with the “predominantly liberal” SA, “and for his status as a Graduate Student,” further creating “a hostile environment within the SA towards Graduate Students,” O’Brien wrote. She said grad students are “disproportiona[tely] underrepresented” in the SA despite constituting a majority of GWU enrollment.

The Fix emailed Hill and SA Vice President Amy Martin Thursday night to clarify what constitutes a hostile environment, who determines what is hostile and how Corsi’s behavior specifically violated university or organizational rules. Neither has responded.