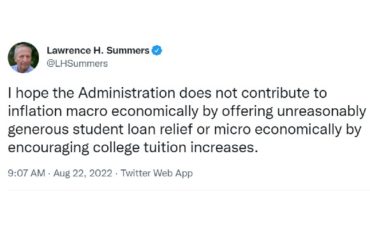 The former Harvard president warned President Biden not to bailout everyone

Summers, who served as Treasury Secretary under President Bill Clinton and also worked as the president of Harvard University, tweeted that President Joe Biden needs to be careful about any student loan bailout.

“I hope the Administration does not contribute to inflation macro economically by offering unreasonably generous student loan relief or micro economically by encouraging college tuition increases,” Summers wrote. “Every dollar spent on student loan relief is a dollar that could have gone to support those who don’t get the opportunity to go to college.”

If relief is to be given it should not set any precedent, it should only be given for the first few thousand dollars of debt, and for those with genuinely middle class incomes.

Biden and other top Democrats have floated various ideas for bailing out student borrowers, including $10,000 and $50,000. An analysis from the Texas Public Policy Foundation concluded that an executive order bailout is likely illegal. Alan Dershowitz, professor emeritus at Harvard Law school, has also said that a student bailout through executive action would be illegal.

Student loan debt relief is spending that raises demand and increases inflation. It consumes resources that could be better used helping those who did not, for whatever reason, have the chance to attend college. It will also tend to be inflationary by raising tuitions.

The worst idea would be a continuation of the current moratorium that benefits among others highly paid surgeons, lawyers and investment bankers.

“If relief is to be given it should not set any precedent, it should only be given for the first few thousand dollars of debt, and for those with genuinely middle class incomes,” he wrote.

Summers is the latest economist to warn about the problems with student debt bailouts.

Two finance professors wrote in July that it would be “bad policy” and “bad economics” to provide an expansive bailout to borrowers. Mitch Daniels, the president of Purdue University and the former Office of Management and Budget director under President George W. Bush, called the idea “fatally flawed.”

“This is another very regressive suggestion, they’re going to give money to people making three times the national median average,” Daniels told CNBC on May 31.

“There’s just no way to present this, that it isn’t a giveaway to people who don’t need it and who freely took these obligations on.”