Medical professor denounces ‘impact’ rationale: ‘this is not acceptable in science’

Johns Hopkins University’s independent student newspaper contributed to the public understanding of COVID-19 with an article on a JHU scholar who found no notable change in total U.S. deaths this year.

Apparently stung by blowback for highlighting research that violates the established orthodoxy on COVID-19, the News-Letter removed the Nov. 22 article, which included several illuminating graphs, but didn’t say anything about it was factually wrong. (It’s archived.)

“Though making clear the need for further research, the article was being used to support false and dangerous inaccuracies about the impact of the pandemic,” the newspaper tweeted Thursday night. “We regret that this article may have contributed to the spread of misinformation about COVID-19.”

Though making clear the need for further research, the article was being used to support false and dangerous inaccuracies about the impact of the pandemic. We regret that this article may have contributed to the spread of misinformation about COVID-19.

It’s far from the first student newspaper to issue a mea culpa for coverage that upset a particular interest group but was not factually disputed. A year ago, Northwestern University’s student newspaper apologized for harming student protesters who crashed a Jeff Sessions event by taking photos of them, asking for interviews and publishing the names of interviewed sources.

Michigan State and University of Maryland researchers used a similar excuse when they asked an academic journal to retract their study on race and police shootings because “War on Cops” author Heather Mac Donald cited it. 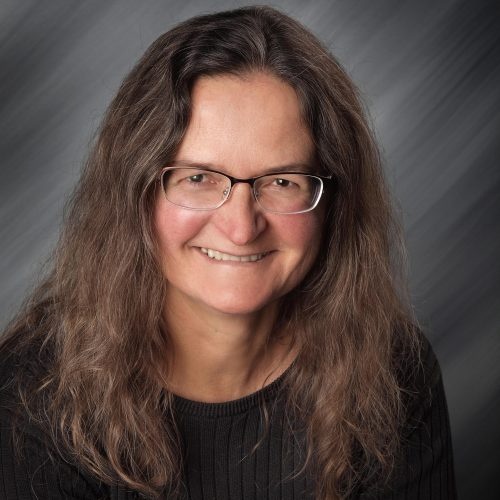 The News-Letter reported on a webinar by Genevieve Briand (right), senior lecturer and assistant director for the graduate program in applied economics, and interviewed her.

Briand looked at total deaths per age group from early February – about a month before the first U.S. lockdowns – to early September:

Surprisingly, the deaths of older people stayed the same before and after COVID-19. Since COVID-19 mainly affects the elderly, experts expected an increase in the percentage of deaths in older age groups. However, this increase is not seen from the CDC data. In fact, the percentages of deaths among all age groups remain relatively the same. …

Briand also noted that 50,000 to 70,000 deaths are seen both before and after COVID-19, indicating that this number of deaths was normal long before COVID-19 emerged. Therefore, according to Briand, not only has COVID-19 had no effect on the percentage of deaths of older people, but it has also not increased the total number of deaths.

These data analyses suggest that in contrast to most people’s assumptions, the number of deaths by COVID-19 is not alarming. In fact, it has relatively no effect on deaths in the United States. 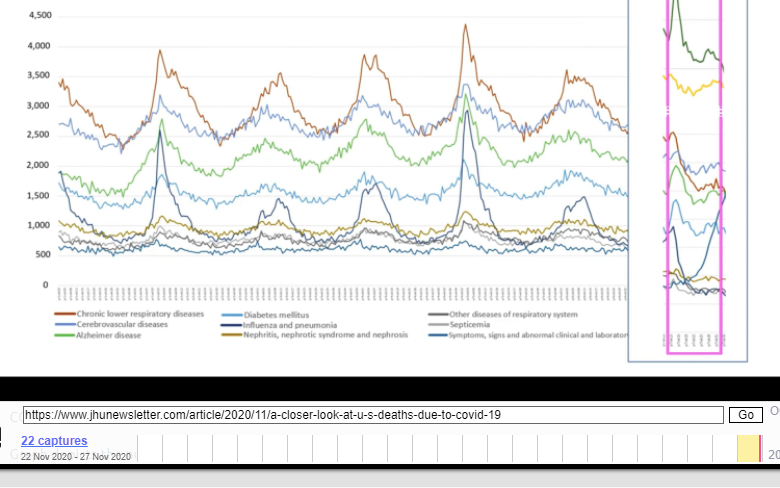 What was different about 2020: other causes of death inexplicably plunged, including heart disease. “This was highly unusual since heart disease has always prevailed as the leading cause of deaths”:

However, when taking a closer look at the death numbers, she noted something strange. As Briand compared the number of deaths per cause during that period in 2020 to 2018, she noticed that instead of the expected drastic increase across all causes, there was a significant decrease in deaths due to heart disease. …

…  the total decrease in deaths by other causes almost exactly equals the increase in deaths by COVID-19. This suggests, according to Briand, that the COVID-19 death toll is misleading. Briand believes that deaths due to heart diseases, respiratory diseases, influenza and pneumonia may instead be recategorized as being due to COVID-19.

Reporter Yanni Gu didn’t uncritically accept Briand’s conclusions, and even interviewed a skeptical student in her program. Asked if COVID-19 may have “exacerbated and even led to other deaths,” Briand responded:

“I’m sorry, but this is not acceptable in science,” Vinay Prasad, associate professor in the University of California-San Francisco’s Department of Epidemiology & Biostatistics, tweeted about the article’s memory-holing.

“We can’t delete, censor and retract, if a claim is not fraudulent. We certainly can’t simply because an analysis is misused,” he said. “Censoring is a grave threat to science.”

Standard practice in science publishing is not to delete articles but rather label them “retracted such that folks can still see what the underlying materia[l] was. We don’t scrub or delete,” Prasad said in another tweet.

The newspaper published a longer editor’s note Friday explaining the article’s removal on its original page, and linked to a PDF of the article.

While the article “has been used to support dangerous inaccuracies that minimize the impact of the pandemic … it is our responsibility as journalists to provide a historical record,” the note says.

The student journalists faulted Briand for her research on the topic despite being “neither a medical professional nor a disease researcher.” She made one false statement, they claimed, and “trivialize[d] the repercussions of the pandemic” by showing deaths attributed to COVID-19 as a percentage of total U.S. deaths:

Briand also claimed in her analysis that deaths due to heart diseases, respiratory diseases, influenza and pneumonia may be incorrectly categorized as COVID-19-related deaths. However, COVID-19 disproportionately affects those with preexisting conditions, so those with those underlying conditions are statistically more likely to be severely affected and die from the virus.

The newspaper failed in its duty “to combat the spread of misinformation and to enhance our fact-checking process,” it said.

Briand told The College Fix that the reporter “did an excellent [job] at reporting the content of the presentation” and emphasized it was the newspaper’s decision to remove the article, not the university’s.

She provided a link to her full presentation but did not answer two queries for her thoughts on the broader response to her research from the university community and others, including from the critical editor’s note.

UPDATE: Briand responded to a Fix query and the newspaper published a longer editor’s note after this post was published. They have been incorporated.