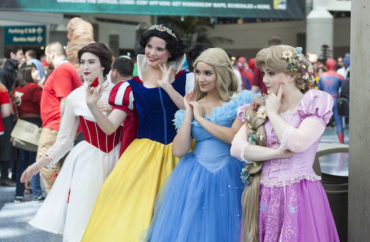 A student op-ed recently argued that the classic Disney princess films are roundly misogynistic, denouncing the “patriarchal hegemony” and “heteronormative standards” that they allegedly exude.

At The Daily Californian, Julie Lim states that “watching a movie as an innocent and naive child is a completely different experience from watching it when you’re older” because “when we’re younger, we’re much more impressionable and more readily internalize the messages we watch.”

To that effect she cites the “misogynistic messages” of the Walt Disney Company’s fairytale classics. Noting that “Disney’s movies are integrated into countless aspects of our childhoods, from Halloween costumes to cereal boxes,” Lim writes that Disney “sugarcoats” the purportedly anti-woman messages in the films:

There are the obvious storyline objections: The kisses Snow White and Sleeping Beauty received weren’t consensual, Belle had Stockholm syndrome, and Ariel changed her whole identity for a man she had never met. Then there are the more subtle implications of how Disney princesses and princes are portrayed, a passive reinforcement of gender roles that is shared in almost every beloved Disney film. It’s like a sexist version of the hero’s journey: The girl always embodies idealized feminine characteristics — sweet, demure, pretty, fair, soft. There is something the girl yearns for — Ariel wants to be on land, Belle wants adventure in the great wide somewhere — that is only fully fulfilled with the help of a man. The girl ends up with said man.

Even the empowered princesses in the more “woke” Disney films need male assistance to achieve their goals. Tiana works two jobs to save up for her own restaurant — but still needs money from Prince Naveen to ultimately buy it. Mulan saves all of China to gain the respect of her family — but her grandmother still wryly mentions that she “should’ve brought home a man” when she comes back. I didn’t think of the injustice of it all when I was a kid, but how infuriating is that? That woman single-handedly saves the entire country, but she still needs to bring Shang home to satisfy her grandmother. What kind of message does that send little girls?

Lim suggests countering the allegedly toxic messages of Disney by studying feminist authors. “[T]he next time you shove in a DVD to watch with your little sibling or cousin, maybe read them some of ‘The Feminine Mystique’ or an excerpt from Judith Butler afterward,” she writes.