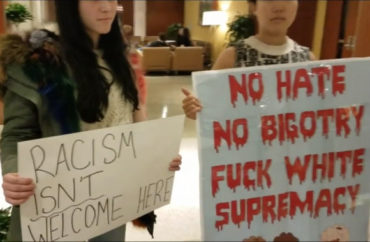 PHILADELPHIA – Heather Mac Donald provokes strong reactions in audiences when she speaks on campus. Black Lives Matter protesters repeatedly disrupted the author of “The War on Cops” when she spoke at UCLA nearly two years ago.

Her detractors at the University of Pennsylvania on Thursday night were better behaved. Yet even the presence of a university-sent “open expression observer” didn’t discourage the largely hostile audience from frequently interrupting Mac Donald.

They also tried to stump the Manhattan Institute scholar with questions, went off topic and snapped their fingers in unison when others in the audience answered.

Mac Donald spoke at the invitation of the Ivy League university’s conservative newspaper, The UPenn Statesman, about her latest book, “The Diversity Delusion.”

As word of Mac Donald’s pending appearance spread around campus, several groups organized protests. Campus police coordinated with the editor-in-chief of the Statesman to provide two detectives to escort her in and out of Steinberg-Dietrich Hall. They also discussed entry and exit points.

Protesters outside the hall were largely quiet, however, choosing to hold signs rather than chant. One threatened to sue if video of her protest was posted, though recording public protests is legal.

None admitted to reading Mac Donald’s books or could cite specific arguments of hers they opposed.

Several progressive campus groups invited supporters to join a “silent protest” against Mac Donald and her “hateful rhetoric” outside the lecture hall.

She has actively promoted slut-shaming survivors following the #MeToo Movement. She has expressed clear Islamophobia and advocates proudly for racial profiling. She has criticized the Black Lives Matter movement and has popularized the untrue myth of the Ferguson effect, that action against racially-motivated police brutality has caused an increase in violent crime.

The groups also advertised “an open safe space in the Penn Women’s Center” for anyone who feels “uncomfortable or unsafe” because of Mac Donald’s presence on campus.

The Drexel Democrats, from nearby Drexel University, showed a more open attitude toward Mac Donald’s visit (below). They invited Facebook supporters to attend the event and “listen in on her interesting take on how she believes universities, in an attempt to help promote diversity, breed racism.”

Approximately 45 minutes before the event began, about 30 student protesters assembled at the entrance of the event.

After students from the hosting group were admitted, one of the protesters claimed they were “letting only white students in the event” and not people of color. The audience was overwhelmingly people of color, however.

One protester who identified herself as “Nahna” asked how the Statesman could invite someone like MacDonald, given her purportedly hateful words. But she admitted she had not read The Diversity Delusion or any other Mac Donald book.

“I did not have to read the book – I read the title,” she said. “Would you read a book entitled ‘I Hate All White Men?’”

Other protesters admitted the same when asked by The College Fix on video. “I don’t have to read her books,” said one who did not identify herself. “I read the excerpts.”

After the event, another unidentified protester claimed that “recording the incident where everyone admitted they hadn’t read the book was illegal.” She asked for it to be erased, and threatened to sue if the recording was posted. “You’re just going to try to clown us and make us look dumb,” she said.

EDITOR’S NOTE: The author is the vice president of the Statesman.

UPDATE: Videos were uploaded to The College Fix YouTube page after this article was published. They have been embedded in the article. The feature image has also been changed to reflect the protest.