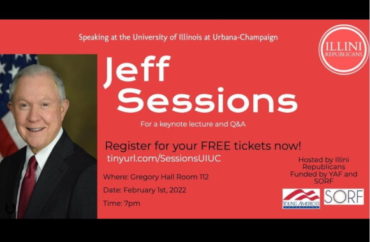 The student government at University of Illinois Urbana-Champaign has passed a resolution demanding that an upcoming speech by former U.S. Attorney General Jeff Sessions be kicked off campus and rescheduled to a time that does not coincide with Black History Month.

Sessions is slated to speak on campus Feb. 1 as a guest of the College Republicans.

A “Safe Campus” resolution was recently approved with a vote of 21-5-1, reports Young America’s Foundation, which is co-hosting the event.

Citing February as Black History Month, the resolution stated in part that “Many black students and other students of marginalized identities view hosting Mr. Sessions on-campus as inappropriate and insensitive” and a “‘slap in the face’ to the university’s commitment to DEI.”

The resolution argued Sessions has made racist comments in the past.

“Illinois Student Government recognizes and respects every individual’s right to freedom of speech. However, we have the duty to condemn insensitive and discriminatory statements, actions, or the presence of any individual that promotes such behavior,” it stated.

Therefore, it added, the student government “firmly insists that the keynote event should be taken off-campus and moved to outside of February.”

Young America’s Foundation reported that on Jan. 27, after the resolution’s passage, the Illini College Republicans condemned their peers’ resolution.

“It is evident from recent events that the ISG doesn’t support diversity of thought on campus,” stated the GOP group. “Though they claim to represent the student body, their attempt to exclude conservative voices from campus suggests they represent far fewer. Intolerance, for the sake of tolerance, is no virtue at all.”

YAF has also released a video montage of some of the student senators’ comments prior to the vote.

They claim it is "inappropriate and insensitive" to host Sessions on campus during Black History Month, and urged the students to move the event off-campus 🙄 pic.twitter.com/KlEfFGY2Pt

In November 2019, a crowd of student protesters stormed a speech Sessions was giving at Northwestern University, leading to a scuffle between officers and demonstrators.

MORE: ‘WE ARE FIGHTING FOR OUR LIVES’: Protesters crash Sessions speaking event