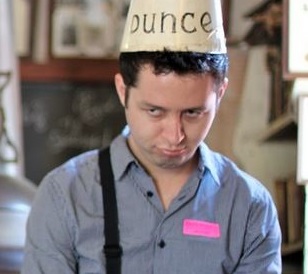 Political correctness knows no bounds at Bowdoin College, one of the worst universities in the nation

Bowdoin College men’s lacrosse players have been disciplined by administrators for how they spent personal time at an off-campus party to celebrate a pre-Thanksgiving meal with friends.

The “Cracksgiving” party took place just before Thanksgiving in a house rented by some members of the men’s lacrosse team. It’s called the “Crack House,” and “Cracksgiving” something of an apparent annual tradition. The invite asked people to dress up like Pilgrims and Native Americans, urging students to “wear your finest Thanksgiving attire.”

Fourteen of the 50 or so who went wore costumes, according to Dean of Student Affairs Tim Foster, calling their actions in an email to the campus community “harmful” and a “racist act that perpetuates prejudice, promotes hurtful stereotypes, and demeans others.”

The school has taken “disciplinary action” against the 14 students, calling it “conduct unbecoming of a Bowdoin student,” Foster stated.

“For some, wearing a headdress and ‘war paint’ on one’s face and bare chest is just harmless fun. For others, it is cultural appropriation that demonstrates poor judgment and insensitivity,” Foster said in his email, sent Tuesday, reports the Bowdoin Orient student newspaper, which printed the memo in its entirety.

Foster was apparently shocked and outraged that some students dared wear the costumes, because in October campus leaders had tried to shame them over their dastardly plans.

“[J]ust a few weeks ago, in anticipation of Halloween and ‘Cracksgiving,’ student leaders held a ‘Cultural Appropriation Fashion Show’ hoping to educate students about inappropriate costumes,” Foster bemoaned in his email. “Many got the point and decided not to wear costumes to ‘Cracksgiving.’ But others, including some of the party hosts who knew about and/or attended these educational efforts, chose to willfully ignore the message.”

And now these conscientious objectors must pay the price.

“Dean Amaez and I have had several conversations with leaders of the men’s lacrosse team, and the team and their coach have discussed this situation together. Members of the team now recognize that these actions were hurtful, and they have decided that the tradition of ‘Cracksgiving’ has run its course,” Foster smugly continued.

But privately, students have taken out their frustration over the situation on Yik Yak. Foster’s not having it.

“[W]e will not tolerate attempts to silence the substantial ongoing student leadership and dialogue on these issues through malicious, personal attacks posted anonymously on Yik Yak and elsewhere—posts that cannot be described as anything other than cowardly,” he stated.

Cowardly? Interesting choice of words, considering that when students at Bowdoin freely exercise their First Amendment rights – off campus no less – they’re publicly shamed and disciplined.

Bottom line: Bowdoin is one of the worst colleges in America.

It received an F grade in October from the American Council of Trustees and Alumni for having one of the worst core curriculum graduation requirements in the nation, lacking basics such as history and economics.

Furthermore, regardless of major, there is no foreign language requirement for graduation. But students are required “to take one course each in the areas of ‘Exploring Social Differences’ and ‘International Perspectives.’ There is no such requirement for anything dealing with America’s founding principles, commonalities, or culture.”

In addition to its horrible general education program, it was one of the first colleges in the nation to boot Christian ministries from campus because the Christian groups won’t allow non-Christians to take leadership positions, paving the way for many other colleges to follow suit.

Every year it takes naked pictures of some of its female students. Seriously.

In short, parents do not send your kids there. Just … don’t.