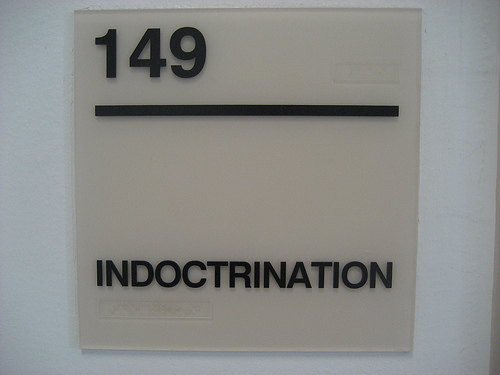 Nowhere, outside of perhaps the IRS break room, is liberalism so ostentatiously on display as in academia. Here, liberals get to spend their time engaging in their favorite debates: the ones they don’t have to have. Disagree with them? You’re a racist. Please have your essay on “Why Everyone Who Disagrees With Me Is A Racist” in my dropbox by this afternoon.

All of this, it must be admitted, makes for some rather hilarious pronouncements. And, like the best hilarity in every age, most of it is entirely unintentional.

In this article, I list the ten most memorable Liberalisms read, heard, and overheard in my lengthening career as the token pariah in three separate institutions of higher education.

“Only ten?” you ask? Well, my editor gave me a word count, you see.

10. Ronald Reagan disparaged… in a book about medieval forestry. In Japan.

Remember that time Ronald Reagan, Karol Wojtyła, and Margaret Thatcher drove the most blood-soaked tyranny in world history out of the freedom-crushing business? Well, liberals don’t recall that part, but they do recall that the “ideologically couched, interest-group Cold War politics of Reaganites and residual Breshnevites seemed to be propelling humankind toward catastrophe.” Aha, this must be a book about geopolitics in the late twentieth century.

Well, sort of, if by “geopolitics” you mean “forests in Japan five hundred years ago.” After this even-handed preface to The Green Archipelago, environmental historian Conrad Totman spends 214 pages outlining the minutiae of forest management during the Tokugawa Shogunate, proving that no subject is too esoteric to preclude a good jab at conservatives.

9. Ronald Reagan disparaged… in an article about medieval peasant revolts. In Japan.

Does the Left love Reagan, or what? They can’t stop talking about him. In a review of books about Japanese peasant revolts, political historian Roger Bowen levels the insult of all insults at poor Richard Smethurst, a distinguished scholar of the Japanese political economy, by calling him “Reaganesque.”

Why? “Because like the Great Communicator, Smethurst is not shy about pointing to the Japanese equivalents of the leading economic indicators in order to make his point that farmers never had it so good. Also like the American president, Smethurst neatly avoids the bad news about the economy and those for whom the bad news was written (albeit seldom reported).”

Fortunately, just when the “Reaganesque” dig was getting a little shopworn, “Bushesque” swooped in to take its place. Speaking of which:

Did you know that, in politics in 2006, “the delusional is no longer marginal”? Bill Moyers did. He further knew that, “it has come in from the fringe, to sit in the seat of power in the Oval Office and in Congress.” Look there at all the stuff you didn’t know! Fortunately, there’s Bill Moyers, who knows hard stuff so the rest of us don’t have to.

This quote was the epigram to Ch. 9, “Orthodoxation of a Holy War,” in Walter A. Skya’s Japan’s Holy War: The Ideology of Radical Shintō Ultranationalism. Gosh, I wonder which other “holy war” Skya was alluding to. Perhaps the one that Muslims were waging about that time—you know, the one where they accidentally tipped over two of our buildings back in 2001? That evil George Bush—he just couldn’t get enough of defending the nation from terrorist attacks.

But, you know, actually shooting the maniacal Muslims and killing them is so last century. Couldn’t George Bush have found some way to defeat the terrorists and keep Bill Moyers happy?

7. Margaret Thatcher blamed for the coarse manners of the English, and for deliberately increasing unemployment in Britain, but the book is still assigned as serious scholarship.

Terry Eagleton’s Ideology exposes perfectly the hypocrisy of the current leftist custodians of the academy. He gets away with saying, for example, that Margaret Thatcher converted “the moderately pleasant people who populated [England …] into a thoroughly nasty bunch of callous, self-seeking oafs. Unless most of the British have become completely hideous and disgusting characters, Thatcherism has failed in its aims. [… Margaret Thatcher] deliberately foster[ed] massive unemployment[, … and] exploited the cynicism, apathy and masochism of some of the British people.”

A model of sober scholarship, if ever there was one.

Eagleton also informs his readers that “a peculiarly noxious brand of Christian Evangelicalism” has swept across the United States. Once you’ve insulted an entire class of political party members, you may as well go ahead and insult their religion, too.

But all this is alright, because, as I’m sure is also the case at your school, for every book we’re assigned that denigrates Christianity, Israel, and conservatives of every stripe, we’re assigned another book that takes the Leftists to task, too. It all evens out, and there’s always an attempt to balance one viewpoint with another.

That’s how it is in your graduate seminars, too, right?

6. Global warming hyperventilation… in a newsletter. Between announcements about babysitting groups and recipes for rhubarb pie.

The newsletter distributed to my university apartment complex by the office staff is usually pretty fluffy stuff. Field trips to the zoo, ice cream socials for new moms, announcements about changes to the bus schedules… and, of course, diatribes about global warming, peppered with some gratuitous jibes at Sen. James Inhofe (R-OK).

I wonder if there will be a follow-up to that article, informing everyone that global temperatures have remained flat for the past fifteen years. Will be checking my mailbox to find out!

This one actually came from a fellow grad student. We had been assigned a book on the glories of welfare, complete with a picture of Jane Fonda on the cover and everything (the collectors’ edition, I suppose). The book was about a woman named Ruby Duncan, who organized welfare recipients in Las Vegas into a giant mob so they could go out and protest for more welfare. (Your mob is not official until at least one downmarket Hollywood celebrity shows up. Otherwise, you’re just a madding crowd.)

When I pointed out that, with probably the same amount of effort, the same people could have organized in order to create gainful employment for themselves, a classmate let me know that conservatives should be supportive of Ms. Duncan, because extorting greater amounts of money from the taxpayers is “entrepreneurial.”

Boy, am I out of touch. When I was growing up, extorting anything from anybody was called a “crime.” And demanding free money from people in exchange for doing nothing was called “shameful.”

4. History should pretty much exclusively be about… the historian.

This was the conclusion of our professors during a seminar on historical writing. Objective facts? Meh. Self-referential whining? Back up the truck!

Of many readings pointing out the subjectivity of all reality (a curious conclusion to reach, and especially to preach, because radical subjectivity would seem to preclude both rational thought and communication of any kind), one stands out. A particularly nasally “activist” named Allen Bérubé wrote an article about, well, almost about an historical topic, but really about how he (Mr. Bérubé) was treated snidely at a party once for having an older-model car. This galvanized his class consciousness, leaving him free to identify with the other marginalized people he was supposed to be writing about.

The most salient thing about you… is me!

3. Timothy McVeigh was a “disgruntled patriot.”

Did you pick up on that subtle association? Eric Foner probably hopes you did. In his book The Story of American Freedom, Foner tries very hard to tie everything patriotic to that particular feeling you might have of being hunted by Sasquatches when you’re taking a stroll through a darkening wood.

He does try to be fair in some places, though. Like when he says that “[Barry] Goldwater’s nomination in 1964 was a remarkable triumph for a movement widely viewed as composed of fanatics out to ‘repeal the twentieth century’.”

Nevermind about being called a “fanatic” if you like Goldwater, though. (You don’t, do you? You see, this is precisely why I have the Southern Poverty Law Center on speed dial.) Because if you’re patriotic, you’re probably just one disgruntled twitch away from blowing up a federal building. Just like that arch-patriot, Timothy McVeigh, whose atheism and hatred for humanity are precisely the same sentiments that led millions of other “patriots” to give up their lives so that even Eric Foner might be free.

2. There is no objective truth… said just about every college professor ever.

Gender is a social construct. (Translation: Please don’t ask me what gender is.) All truth is subjective (except this one—check!). All traditions are invented (and only we, Eric Hobsbawm and Terence Ranger, have been clever enough to realize it).

Ever wonder why enrollments are dropping in the humanities? Perhaps some of the tradition-inventing, guns-and-God-clinging rubes that the professoriate loves to insult have figured out that they can skip the two-hundred-thousand-dollar college loan and just get some guy sitting next to them on the subway to say “reality is whatever you want it to be.” In the world of federally subsidized higher education debt, following your bliss is a lot more expensive than it used to be.

But next to the wishy-washy pseudo-intellectualizing of the postmodernists, even the marxists look like they have some semblance of a clue:

1. Please do not hold Marx or Marxists responsible for Marxism.

So communism killed a hundred million or so people. Big deal! They were probably reactionary capitalist roaders—running dogs of bourgeoisie decadence—so I’m sure they had it coming, anyway.

“In ten years, who will remember all of this riff-raff?” (Sorry, that wasn’t fair. The quote is from Stalin, uttered laughingly as he signed papers condemning lists of randomly-selected people to death. Stalin was also a Marxist. But what difference does that make?)

Besides, our Marxism is sophisticated. We look at superstructures and we read Adorno and we toss and turn at night over the heretical Gallicisms of Althusser. No execution squads. No Holodomor. No unpleasant gulags or one-way tickets to Siberia. We’re more concerned with the way classes are at each other’s throats. And if they aren’t, then we try to figure out why. And then how they could be. Not that we’d ever act on those kinds of impulses, though. Probably.

Anyway, don’t you remember? Violence is only carried out by patriots. And only patriots are violent. That’s kind of a syllogism, so you know it’s right.

As you head back into your classrooms this semester, please keep this humble list in mind, and please add your own Great Moments in Campus Fairness below!