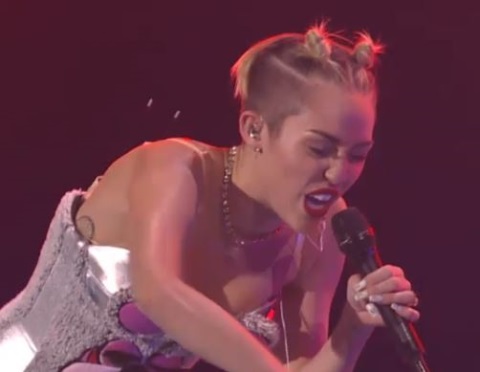 Pop music star Miley Cyrus recently set the nation abuzz with her performance at the MTV music video awards. Apparently the country was aghast to see a scantily clad Millennial thrusting her hips sexually, as if that were a big deal.

The cover of this week’s People magazine includes a picture of Cyrus with her tongue sticking out and the headline: “Miley’s Mayhem: Taking Things Too Far?”

It’s clear from the reaction that average folks have not kept up with the news coming out of college campuses nowadays, because Cyrus’ hip thrusts pale in comparison to today’s university-based antics.

In the last school year alone there’s a parade of examples on which The College Fix has reported that makes Cyrus’ act look like a kiddie-ride at Disneyland:

1. Butt-Chugging 101: The time a bunch of frat boys thought it would be funny to get drunk by ingesting alcohol through their anuses. University of Tennessee, Oct. 2012.

3. Professor Gone Wild: The time a science professor stripped to his underwear in front of his class and then had two ninjas come on stage and behead stuffed-animal lambs while war videos played in the background. Columbia University, Feb. 2013.

6. Tranny Time: The time a devoutly catholic university hosted a drag show that featured an “Asian Glamasaurus” who strut his/her stuff while students nearby prayed the rosary. University of San Diego, May 2013.

7. Prostitution? No Biggie: The time nine percent of Yale University students who participated in a survey on sexual behavior reported having been paid for sex at least once. Yale University, March 2013.

10. Full-Frontal Vagina: The time a university hosted billboard-sized pictures of vaginas in its quad. University of Cincinnati, March 2013.