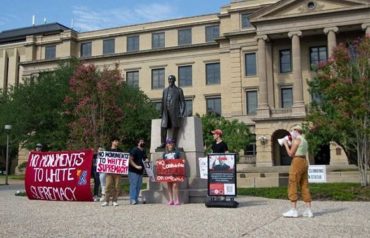 A gaggle of Texas A&M University students gathered at the campus Academic Plaza last Friday to speak out against “white supremacy” and the “lack of administrative efforts” regarding such.

If the student paper The Battalion‘s photo of the protest is accurate (pictured), a grand total of seven or eight students representing the Young Democrats of Bryan-College Station, Students for a Democratic Society and the Aggie Rosies joined to “show a passionate response” to their concerns.

But the students’ main gripe is the continuing campus presence of the Lawrence Sullivan “Sully” Ross statue. Sullivan was a former president of A&M,  governor of Texas and … Confederate general. A&M visualization major Frey Miller said A&M students “have called for the removal of the statue” but that they’re “not being listened to, and the administration has not taken action.”

“The administrative members basically told us that there was nothing that they could do, and they could not take a stance on the issue,” Miller said. “This is entirely false. They do have the ability to take a stance on the issue in the form of a request to take action, specifically regarding historical monuments on campus, and then send this request to Texas A&M or to Texas legislation [sic] regarding Texas public universities, and they simply have not done this.” …

[Wildlife and fisheries senior Kaitlen] Vargas said the reason the group protested was because they love A&M and only want it to improve.

A College Fix report from early last year confirms A&M officials are limited on what they can do about “Sully”; any decision to remove the statue appears to rest with the state legislature.

In addition, the 2020 student survey linked by the Battalion article shows most of the university’s students do not support “Sully’s” removal. While seventy-nine percent of black students and 59 percent of Asians indicated they “likely” or “very likely” support moving the statue off campus, only 21 percent of white students did (and, interestingly, just 18 percent of Native students).

Given the A&M student body is 55 percent white and the survey’s 39 percent response rate — 22,824 total students — this means 9,164 students were “unlikely” or “very unlikely” to back “Sully’s” removal. Forty-two of Hispanic students felt similarly for an additional 2,205. These combined make up half the total respondents. Significant percentages of Asian (31) and non-black multiracial students (62) also said they were “unlikely/very unlikely” to support removing “Sully” from campus.