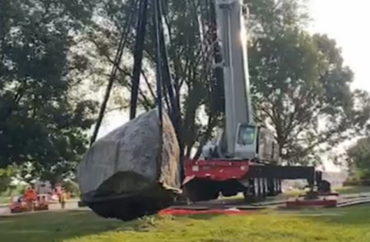 In one of the stupidest and spineless decisions ever made by campus administrators, a 42-ton boulder was hauled off the University of Wisconsin Madison on Friday.

If ever there was a poster child for the absurdity of cancel culture, this is it.

The rock had traveled to the region over 10,000 years ago, deposited by ancient pre-Cambrian bedrock drift from Canada, according to the plaque embedded on the face of the boulder.

It was named Chamberlin Rock after Thomas Chrowder Chamberlin, a dedicated glaciologist and UW-Madison’s president from 1887 to 1892.

For decades, it sat on a secluded section of campus offering geological and earth sciences majors a chance to study and enjoy their chosen field.

But no longer. Administrators caved to the vacuous and ridiculous demand of student protesters to remove it from campus.

A previous estimate weighed the rock at 70 tons but it was more accurately measured recently at 42 tons, Madison.com reports.

The reason given for its removal was a shallow and tenuous complaint: it had once been referred to as “n*ggerhead rock” in the Wisconsin State Journal in 1925.

There is no evidence the offensive term was ever used on campus to describe the boulder.

As The College Fix previously reported:

Daniel Einstein, the historic and cultural resources manager for UW Madison, has researched the university archives for instances of the use of the name in reference to Chamberlin Rock.

“I could only find one instance of the offensive term related to the rock–in the 1925 Wisconsin State Journal article,” reads Einstein’s statement to The Fix. “There is no reference in this article to Chamberlin. The reporter was using the term (in a manner not uncommon for the time) as a generic reference to a geographic or geological feature.”

“The Board of Regents approved the format for a commemorative plaque a year later. The plaque seems to have been installed sometime in late 1926–at which time the attribution ‘Chamberlin Rock’ would have first been used. Before this point, the rock had no officially designated name. None of the available sources describe a dedication ceremony–no photos, no program pamphlets, no speeches.”

In this instance, feelings trumped reality. In today’s Orwellian age, every scrap of history deemed the least bit offensive must be removed — even apparently if it’s only tangentially connected to something offensive, as is the case with Chamberlin Rock.

For those keeping score, this young black progressive activist made this statement some 100 years after the time the rock was once referenced by a slur off campus by someone not connected to campus. That’s the modern definition of oppression, apparently.

And yet, despite the mountain of evidence that the demand to remove the rock was asinine at best, craven administrators gave in.

UW-Madison Chancellor Rebecca Blank and anyone else connected to this decision should be absolutely ashamed of themselves.

This was a prime opportunity for a teachable moment, in which the grown-ups running the campus tell the young people that the answer is “No!” But apparently at UW-Madison, the children are in charge.