A St. Olaf College theater department professor blamed “white rage” and a fear of white students as reasons for her recent decision to leave her job at the small, private campus.

Professor Michelle Gibbs sent an email to a St. Olaf faculty listserv June 18 explaining the driving force behind her decision.

“This past year, I taught in constant fear of my white students. I knew if I angered them, it could mean my job, or fear that they would come for my career,” Gibbs said in the email obtained by The College Fix. “This type of white rage is real for many of us.”

“I am leaving St. Olaf College because as a Black woman I don’t have the full support of my white colleagues at the college. There are not enough white faculty and administrators willing to stand on the front lines to support us against a biased system that is set up to fail us as Black and Brown faculty.”

Gibbs, in her email, invoked the death of George Floyd, who died after a Minneapolis police officer knelt on his neck for over eight minutes, to further explain her disdain for white students at the small Minnesota college.

She said she prefers the caucasians at the ongoing national protests.

“This unpaid emotional labor is often left to Black and Brown faculty who recognize it, feel it, and (all alone) are left to call it out,” the theater professor said in the email. “It is exhausting work, and doesn’t win us any favors with colleagues and administrators. We are often looked at as moody, difficult, uncaring toward white students… the list goes on… and it all goes on our 2nd year… 4th year review…”

She seemed to indicate that her work at St. Olaf was deemed “ineffective,” and the theater aficionado blamed “institutional racism” on the possible negative feedback she was receiving regarding her teaching style.

“This type of institutional racism is highly effective in higher education against Black and Brown faculty. It hides under the guise of ‘effective’ teaching and learning,” she said. “Who gets to determine ‘effective’? My white department. If I don’t teach the way they understand or like, is it still effective? No.”

“If theater students (who are mostly white) don’t like an assignment or are upset with my method of instruction, who determines if my teaching is ‘effective’? My white students. If I don’t teach in a way they understand or like, is it still effective? Probably not to them.” 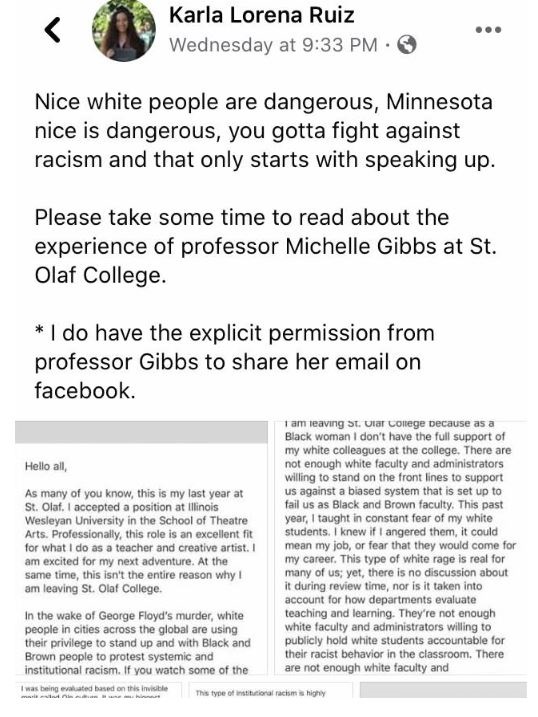 Gibbs ended the email by encouraging white faculty to cooperate in “antiracist” work: “Once you learn how to be an ally, then you can teach white students how to be allies as well.”

A student of the college reposted Gibbs’ email to Facebook, saying “Nice white people are dangerous” and “Minnesota nice is dangerous,” according to a screenshot obtained by The College Fix.

As for contacting the college for comment, VanDerVeen, associate director of communications, has an automated message that points reporters to chief marketing officer Katie Warren. No response was received from Warren.

The College Fix also attempted to contact theater department chair, Karen Wilson, who refused to comment and referred The Fix to VanDerVeen.

Gibbs, according to her email, has accepted a job at Illinois Wesleyan University in the School of Theatre Arts. 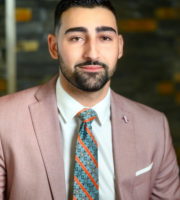 About the Author
Jake Dima
Jake Dima -- University of Florida