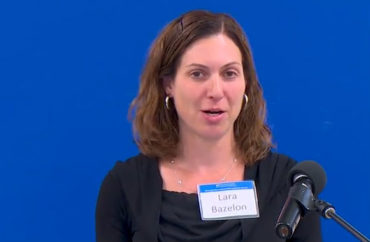 ‘Even more than I bargained for’

When Lara Bazelon got a referral from a fellow attorney to assist an African-American student facing expulsion for the alleged sexual assault of a white woman, the law professor was skeptical.

It was January, and Bazelon was heading up a new pro-bono law clinic focusing on “Racial Justice” at the University of San Francisco Law School. It was partnering with the San Francisco public defender’s office to assist minorities in legal trouble.

That referral ended up altering the focus of the law clinic. Up until that point, Bazelon had not been involved in any Title IX cases. But after discussing it with two female students, including one of color, Bazelon agreed to take the case.

Since then, Bazelon’s law clinic has taken numerous cases assisting low-income minority male students at California colleges who face expulsion over disciplinary charges. It’s still working with the public defender’s office on a wide range of cases as well.

The law clinic got on the national radar when Bazelon published an op-ed in The New York Times earlier this month that expressed support for Education Secretary Betsy DeVos’s* proposed Title IX reforms aimed at protecting due process.

Though Bazelon has argued in favor of due process for accused students before this, the op-ed provoked threatening voicemails and a lot of hate on Twitter, she told The College Fix in a phone interview.

“I expected some,” she said, “but some was even more than I bargained for,” adding the work was important, and “the fact that it is controversial is not going to dissuade me.”

“These are people of color with very limited means who face being permanently severed from their education,” she continued. “It is a population at risk.”

‘This is very important’ to majority-minority school

While Bazelon called DeVos’s proposed rules “far from perfect” in the op-ed, she said they would counter a “shameful legacy”: that America has “long over-sexualized, over-criminalized and disproportionately punished black men.”

She shared a case her clinic handled earlier this year, involving a first-generation black student on an athletic scholarship. He was accused of rape by “his teammate’s white ex-girlfriend” after she reconciled with her boyfriend, even though all agree their second sexual encounter was consensual.

The university judged him responsible for sexual assault because it found the woman more credible, even though her boyfriend also said she was lying.

“There is no hearing, no chance for the accused to ask her questions,” Bazelon wrote. “He’s one of a few black students on campus and worries he may get killed after word spreads.”

The law professor sees the mission of her clinic as essential to USF’s Jesuit mission, which centers on assisting the socially disadvantaged and poor.

She was “lucky” that Jesuit values were so important to the institution, Bazelon told The Fix. When she “explained the situation” to the law school dean, John Trasviña, he supported the clinic’s mission because he saw it as in line with the USF Jesuit mission. The Fix has not been able to reach Trasviña, who stepped down after the 2017-2018 academic year, to confirm the conversation.

Most of her students are women and people of color who see the importance of due process, according to Bazelon, noting her private university has a majority-minority law school. “This is very important to them,” she said. “As far as we know, we’re the only ones doing this.”

It’s been a harder sell outside her law school. Bazelon said she wrote a letter to the University of California system telling them that their “entire procedures are unconstitutional,” but never received a response.

Stanford Law Prof. Michele Dauber has also publicly criticized Bazelon’s diagnosis of what’s wrong in Title IX proceedings. Dauber led the successful campaign to recall a local judge after he issued a short jail sentence to a convicted rapist at Stanford, even though the judge followed sentencing guidelines.

It isn’t direct x-exam. It’s thru an advisor. Why is that myth continuing to circulate? They don’t have to be in the same room and they are not allowed to talk to each other directly. Maybe posing questions to a panel to ask is better. That’s why we have n & c, to weigh in.

The law clinic’s cases serve as good learning opportunities because of the age proximity between the accused students and her own law students, Bazelon said. But her work has not always been greeted with support.

Citing recent California court decisions against UC-Santa Barbara and the University of Southern California, Bazelon said that defending due process “shouldn’t be a radical or controversial position.” Yet she has had several difficult conversations with people she respects who expressed “very strong disagreements” over her decisions to take these sexual misconduct cases.

The law professor called out the American Civil Liberties Union, which is supposed to be defending the rights of disadvantaged people, but “when it comes to these cases, they don’t.”

“We are standing up for the Constitution and making sure that these court decisions are being enforced,” she said.

Bazelon forwarded an interview request by The Fix to two of her students. One declined to talk and the other offered to answer questions via email but has not since responded.