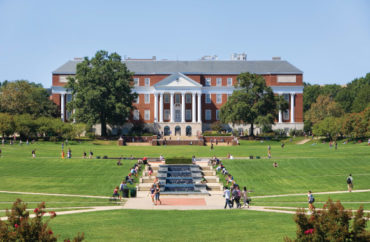 The University of Maryland has committed $1.3 million to purchase and renovate an empty house on the school’s Fraternity Row to serve as a “space” for “cultural interest fraternities and sororities.”

The purchase of what will be known as the “Agora” house, which is Greek for “gathering place,” was announced in December. It will be dedicated for use by the Multicultural Greek Council and the National Pan-Hellenic Council. Both are organizations that primarily serve students of color.

At that time, the school announced $1.2 million to purchase and renovate the house. In mid-December the Maryland Student Government Association voted to spend an additional $97,400 in surplus funds to purchase furniture, lockers, dry erase boards, projectors and screens, and other décor for the building.

The house was last occupied by the Alpha Epsilon Pi fraternity.

A spokesperson for the public university declined to answer questions by The College Fix, instead citing a news article written about the Agora house by the school’s communications department.

The houses were built on Fraternity Row in the 1950s and 1960s, but the minority organizations were not given the opportunity to “acquire their own spaces,” it stated.

The new house is necessary now because of the fraternities’ past racist practices, including “discriminatory membership practices and blackface performances or minstrel shows through the 1960s,” it stated.

“Something that we really deeply believe in fraternity and sorority life is that these organizations can be the most transformative part of the college experience,” said Lorae Bonamy, the Department of Fraternity and Sorority Life’s senior coordinator for equity and social justice.

“We know that historically, that hasn’t shown up in a positive way. So we’re wanting to make a step and say, ‘Hey, there’s a space for everyone.’ We’ve been saying this, and now we’re really creating that.”

Bonamy told the school the pandemic and racial reckoning of 2020 helped spur an overall reevaluation of values, saying that’s when conversations and planning around the Agora “really began to take hold.”

The Maryland student government said it had surplus funds in its account that hadn’t been spent because of the COVD-19 pandemic, which allowed them to send the $97,400 to the Agora project.

“Greek life hasn’t exactly been supportive of people of color in their efforts to join these organizations,” said student body President Kislay Parashar after the vote.

Parashar did not respond to a request by The College Fix to comment for this story.

During the meeting in which the SGA allocated funds to the Agora property, Parashar indicated there may be plans in the future to convert another house on Fraternity Row that may soon become vacant. Parashar said the eventual goal is to move Fraternity Row away from being “a predominantly white-dominated space.”

Plans to transform historically “white” spaces into minority-friendly “affinity” spaces have grown throughout America in recent years. Earlier this year, student leaders at Washington University in St. Louis urged school officials to evict the “disproportionately wealthy and white” men in campus fraternities and give their buildings to “historically marginalized” groups.