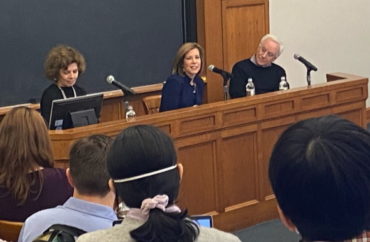 One of the nation’s most preeminent conservative attorneys, Alliance Defending Freedom President Kristen Waggoner, appeared on a panel at Yale Law School on Tuesday and, unlike her visit last year, was able to speak without being disrupted by students screaming like banshees in protest.

Tuesday’s event, hosted by the Federalist Society, was something of a do-over for Waggoner’s March 2022 visit, during which Yale students shrieked and screamed at the top of their lungs, banged on desks, chanted and clapped to protest the conservative attorney, alleging her presence and comments put queer students “at risk of harm.”

This year, Yale leaders clamped down hard on attendees: they barred any press, banished undergrads and opened it only to law students, required IDs at the door, and begged students not to record the discussion, the Washington Free Beacon reported.

It was enough to quell potential unrest.

“It was a pleasure hosting @[email protected] and Nadine Strossen @TheFIREOrg for a conversation on 303 Creative. We’re deeply grateful to Prof. Post for moderating a thoughtful and civil discussion,” Yale Federalist Society tweeted Tuesday. “We’re thankful to all who helped the event go on without interruption.”

Alliance Defending Freedom also tweeted Tuesday: “Today’s event at @YaleLawSch proved that a culture of #FreeSpeech can flourish with civil debate. Time will tell if the school admin is committed to this change, but today offered hope for a new era where tolerance for ideological diversity can succeed on campus.”

It was a pleasure hosting @KWaggonerADF (@ADFLegal) and Nadine Strossen (@TheFIREOrg) for a conversation on 303 Creative. We’re deeply grateful to Prof. Post for moderating a thoughtful and civil discussion.

We're thankful to all who helped the event go on without interruption. pic.twitter.com/uanF26Pvc9

Tuesday’s event, “A Conversation About 303 Creative,” also featured Nadine Strossen, former president of the American Civil Liberties Union and current senior fellow with the Foundation for Individual Rights and Expression.

Waggoner argued the case before the U.S. Supreme Court. The case, 303 Creative v. Elenis, looks at whether business owners’ constitutional right to religion and free speech allows them to refuse services to LGBTQ customers.

“The event comes two months after the law school issued a statement reaffirming its commitment to free speech and is widely seen as a do-over of Waggoner’s abortive talk last year,” the Free Beacon reported.

“…Though Strossen supports same-sex marriage, she told the Free Beacon that she agrees with Waggoner’s position in 303 Creative LLC. She agreed to participate in the event, she said, to illustrate that liberals and conservatives can find common ground on free speech issues. That was also the premise of the March 2022 event, which featured Waggoner and Monica Miller, an attorney with the American Humanist Association.”

One of the reasons this year’s event was likely under such strict scrutiny was due to the largely embarrassing display captured on audio when students protested Waggoner last March.

A series of audio clips published by Alliance Defending Freedom captured students shrieking and screaming at the top of their lungs to disrupt the event. Police were reportedly called to help keep the peace, and as the panel concluded, officers escorted Waggoner out of the building.

The incident made headlines and was widely seen as an embarrassment for Yale Law.