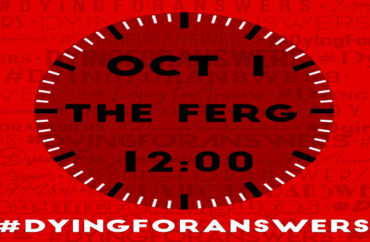 Students at the University of Alabama staged a “die-in” yesterday to bring attention to “the experiences and concerns of marginalized students on campus.”

The “tip of the iceberg” for those involved in the so-called “#DyingForAnswers” campaign was the resignation of Dean of Students Jamie Riley. In what was an ironic twist of progressive “cancel culture,” old tweets from Riley’s Twitter account were brought to light in which he said the American flag represented racism, and that police were part of “that system.”

The die-in follows a protest from last month in which UA students marched for “diversity and free speech.”

According to The Crimson White, die-in participants were instructed not to talk during the protest, and instead offer a written statement about the event: 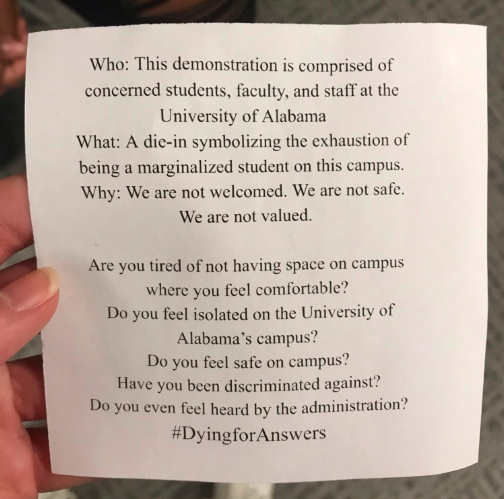 UA senior and #DyingForAnswers member Mikayla Wyatt told AL.com that “Students are just tired. We’re tired of administration not taking the situation seriously… tired of not being heard, not being seen and not having the spaces on campus that support minority groups.”

She added that minority students “face microaggressions, verbal, behavioral, or environmental indignities that communicate prejudice, every day at UA.”

“Though there have been great strides made, the time has come again for The University of Alabama to uphold its mission and core values of advancing the intellectual and social condition of the people of the state as well as its commitment to a culture of inclusivity,” Semaj’ E. Davis said in a press release. “The lack of response from the administration, specifically Dr. Stuart Bell, has sent a very frank message to minority students: stay in your place.” …

Wyatt said she wants UA administration and Alabama Board of Trustees to pay attention to the needs of minority students, including the need for a designated physical space for and minority students students to have their own programming and staff.

In Scholars.com Bedelia Nicola Richards, associate professor of sociology at the University of Richmond, acknowledges that “Black students need safe spaces on predominantly white campuses where they can have a reprieve from anti-Black racism.”

“We’re all students,” Wyatt said. “We pay the same tuition. And nobody should have to experience what is being experienced by minority students.”

The die-in was heavily promoted on Davis’s Twitter feed as well that of UA’s Black Faculty and Staff Association.

AL.com notes it has sought, via a FOIA request, email correspondence from the university regarding Riley’s departure. It has yet to receive a response.