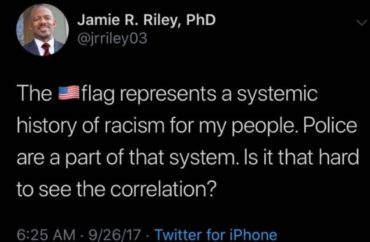 The tactics devised by progressives to “cancel” their enemies have been deployed against themselves.

University of Alabama Dean of Students Jamie Riley resigned from his post a day after some of his old tweets were exposed, The Crimson White reports. Riley has since deleted his Twitter account.

One tweet from two years ago read: “The [American] flag represents a systemic history of racism for my people. Police are a part of that system. Is it that hard to see the correlation?”

In another, the official with the rank of assistant vice president said that white people “can’t experience racism,” so they can’t claim anything is “not racist.” He followed with the hashtag #missmewithyourprivilege.

Nearly three years ago, Riley expressed his frustration with “movies about slavery,” wondering whether they were made to “remind Black people of our place in society?” (Nate Parker’s Birth of a Nation came out in 2016, and was controversial for other reasons.)

The tweets were unearthed by Breitbart, and its role was pooh-poohed by UA’s campus newspaper.

In the original version of what was supposed to be a news article (below), before even detailing Riley’s tweets, the Crimson White wrote:

Breitbart News has a reputation for racist, sexist, homophobic, xenophobic, transphobic and other derogatory headlines and content published on its site.

I submitted a comment on the article in the late morning Friday, scolding the student newspaper for including irrelevant opinion language in a news story and undermining its credibility with readers.

By late afternoon, the language had been replaced with: “Breitbart News has a reputation for being an ultra-conservative news, opinion and commentary website.” The newspaper has yet to note it made the change, and has yet to post my comment more than five hours later (below).

Riley has been in the position for less than a year, previously serving as executive director and chief operating officer of the historically black fraternity Alpha Phi Alpha. Before that he “served in various student affairs and diversity and inclusion roles” at universities including Johns Hopkins and UC-Berkeley, the University of Alabama said when it hired him.

The Crimson White confirmed his departure late Thursday afternoon from a student government spokesperson, who said “the University and Dr. Riley have mutually agreed to part ways.” The university’s official statement followed, claiming Riley “has resigned his position at The University of Alabama by mutual agreement” but offering no further comment.

The student newspaper also noted both Riley’s contact information on the dean of students webpage and his LinkedIn account have been deleted. It later verified the controversial tweets were indeed posted on Riley’s account. 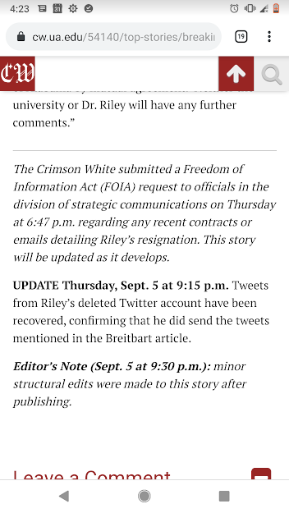 Reason writer Robby Soave criticized the “conservative snowflakes” at Breitbart for unearthing the tweets and engaging in the same leftist-driven “cancel culture” he criticizes in his book Panic Attack.

“Fainting-couch conservatism strikes again,” wrote the author and former College Fix editor. “[T]he tweets didn’t just resurface on their own,” Soave continued, citing the passive phrasing of the article: “[T]hey were publicized by the right-wing news site in order to send a social media mob after Riley.” (The Breitbart article is as restrained as any published on the site since its reconstruction as a pro-Donald Trump outlet.)

“It seems clear that it was bad publicity from Breitbart that got Riley terminated. This was an entirely foreseeable consequence of writing such an article,” Soave continued, frowning on the reporting of tweets by taxpayer-funded officials whose duties include promoting diversity and inclusion for students of all viewpoints.

“[A]s long as the right is perfectly willing to enforce its own version of political correctness, it is difficult to to believe that they really agree in principle that you shouldn’t do this kind of thing,” he wrote, calling on conservatives to demand Riley’s reinstatement.

“If you only defend the cancelled when you agree with them, then you’re not actually against cancelling. You’re just protecting your tribe,” Soave concluded.