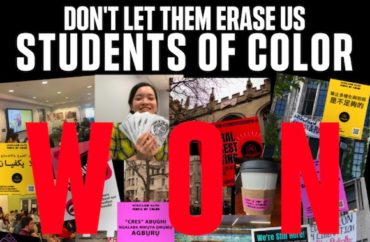 The University of Chicago last week announced the creation of the Department of Race, Diaspora, and Indigeneity which, allegedly, will “produce new understanding and fresh insights into the world we live in by studying how conceptions of race have emerged in different eras and circumstances.”

According to The Chicago Maroon, President Paul Alivisatos and Provost Ka Yee Lee said the new department is the result of a “a multi-year, faculty driven process.”

But activist student groups had a big problem with that characterization.

The POC (People of Color) coalition known as UChicago United posted on Twitter that “in official communications, UChicago recognized the creation of the department only because of faculty efforts. DON’T LET THEM ERASE US!

“It was STUDENTS OF COLOR who won this department, who have organized for YEARS, pressuring faculty to take action. We celebrate, but also chastise this erasure and caution that the work is not over.”

MORE: UChicago United encourages students not to call cops when they witness stealing

UChicago United also posted a version of Alivisatos’ and Lee’s message as it feels it should have been worded, noting at the end that U. Chicago needs a “community-led department” that will be “complicit in the abolition of the university”: 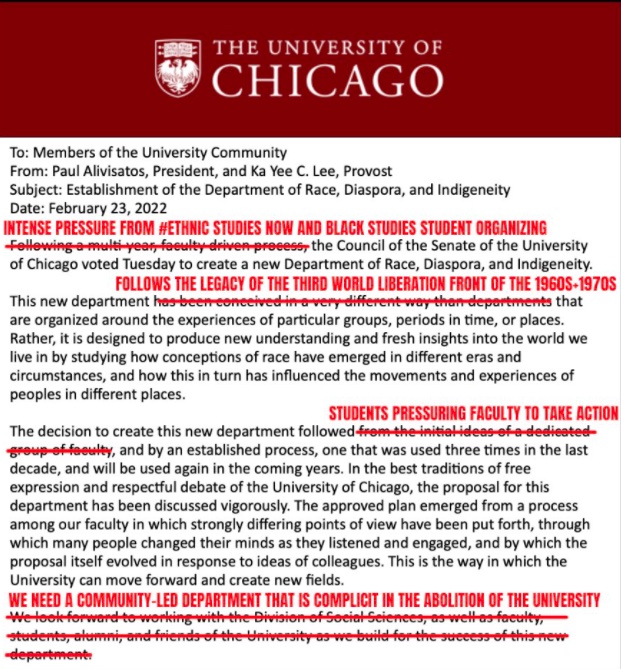 The coalition highlighted a message addressed to the campus community from “#EthnicStudiesNow Organizers” which notes the work of creating the Race, Diaspora, and Indigeneity Department is based on “five generations of students of color [who] have marched, chanted, wheat-pasted, rallied, banner dropped, and occupied […] whose values are aligned with the Third-World Liberation Front and other radical, multiracial student coalitions from the 60s and 70s.”

Lastly, the letter pooh-poohs the university’s DEI (diversity, equity, inclusion) initiatives as “superficial” — they do not deal with how U. Chicago “perpetuates violence on campus and beyond.”

Activists view the new department as the “first step” in the transformation of the school into an institution “that struggles against the role of higher education as the ideological backbone and complicit beneficiary of a racial capitalist, imperialist, colonial, heterosexist, carceral society.”

In a statement to The Maroon, the University of Chicago Graduate Student Union supported the message, noting it also wants an academic department which would “work to dismantle and struggle against [the University’s] institutional complicity with racism and colonialism.”