When Chinese students complained about an art exhibit critical of their home country, the University of Missouri-Kansas City wasted an educational opportunity regarding freedom … and removed the exhibit.

The display crafts the Chinese flag into one featuring a swastika, along with a person in a raincoat and gas mask with the hashtag #FREE HONG KONG, all in yellow.

Yellow is the color of solidarity with Hong Kong protesters

According to The Kansas City Star, students made their complaints on Thursday to the art department. In an email, they said “many students have felt a sense of racism” about the art, and that the display “showed [an] extremely disrespectful attitude towards the[ir] country.”

They also alleged the art was “hate speech,” with one student claiming (again, wrongly) “I think it is still crucial to keep in mind that hate speech of any kind is not free speech.”

UMKC alumna Judy Zhang said “calling us Chinazi and putting that in a public area is just too much.” 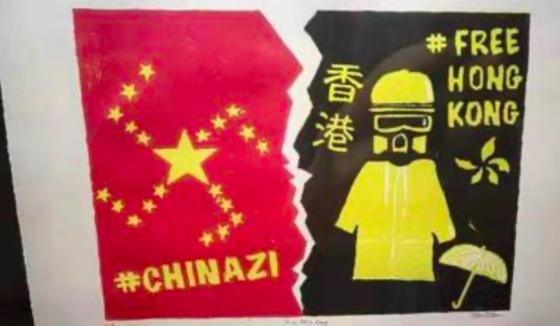 The university claims the display was already slated to be removed and replaced.

Art instructors often display student work throughout the building, [Art Professor Elijah] Gowin said Friday morning. He said the piece, part of a collection of student work, had not been removed. He said feelings of students on both sides of the issue were being considered.

But The Star later learned that the challenged piece had been removed and a different art display put in its place.

A statement from the university Friday afternoon said, “UMKC is committed to the First Amendment and the right of free expression that it guarantees. As a public university, we do not censor political commentary based on the viewpoints expressed. We also are willing to listen to opposing viewpoints and provide opportunities for those to be heard as well.”

The statement also said that student artwork is displayed on three-week cycles and that the disputed piece was set for removal on Nov. 14.

“The removal was in no way a response to complaints about the work’s content,” the statement said.

The College Fix asked Star reporter Mará Rose Williams if she was given a copy of that “three-week cycle” schedule, and also requested one from the university.

The student artwork at University of Missouri-Kansas City reimagining the Chinese flag as a swastika is undoubtedly protected by the First Amendment, even if some students found it to be hateful. If universities removed artwork whenever they fielded complaints, their campuses would be full of bare walls. If UMKC removed the artwork on the basis of the viewpoint it expresses, it must restore the work to its location as soon as possible.
As the clashes in Hong Kong continue, universities in the United States must prepare for that conflict to reach their campuses, too. Administrators at public universities like UMKC must be ready to defend their students’ right to comment on significant political events, regardless of how unpopular or controversial their views may be.

MORE: Hong Kong students face harassment in US over conflict with China