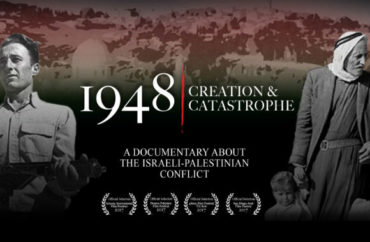 Only four days after International Holocaust Remembrance Day, three departments at the University of California-Irvine screened a film that portrays Jews as “war criminals and monsters,” according to a person who attended.

Though one of the sponsors told her the event was intended to provoke “intense dialogue,” Debra Glazer told The College Fix there was “no difficult dialogue” because every person on the following panel discussion “expressed a Palestinian anti-Zionist narrative.”

Glazer attended the Jan. 31 screening of “1948: Creation and Catastrophe” as the Orange County representative for StandWithUs, a pro-Israel advocacy group. It was hosted by the schools of humanities, social sciences and social ecology. The film’s directors and executive producers participated on the panel discussion.

She wrote a narrative of the event posted by Gary Fouse, a longtime UCI lecturer who retired in 2016 and closely follows anti-Israel happenings around the university.

Glazer wrote in an email that she was concerned about the screening because the film “demonizes and delegitimizes” Israel and its citizens. This portrayal has the potential to put them and supporters of Israel “in danger.”

The “growing anti-Semitic hate movements” are fueled by exactly this kind of “dehumanizing propaganda,” Roz Rothstein, CEO of StandWithUs, told The Fix in an email. UCI is “institutionalizing and normalizing hate and misinformation” by hosting this event and “promoting it in an uncritical fashion.”

The Fix sent multiple emails to the dean of each sponsoring school, but did not receive a response.

Tom Vasich, director of media relations at UCI, told The Fix in an email “the exercise and protection of freedom of speech and expression are at the core of the university’s mission.”

The university also “maintains robust programs and partnerships” regarding Israel and issues facing the Jewish community, Vasich wrote. His email was the “final statement” the school would have on this event.

The film proved too toxic for an earlier sponsor, 50 miles away from Irvine.

The city of West Hollywood postponed plans in December to screen “1948” and host a panel discussion with its producers, following opposition from the Jewish community, local news website WEHOville reported. The lesbian rabbi of its local synagogue called the film “anti-Israel propaganda.”

‘How does one redress” the ‘historic wrong’ of Israel’s establishment?

Glazer’s summary said the event stood out because of its location and guest list. It was hosted in a “plush” business school auditorium and a “large portion” of the room was reserved for “special guests,” apparently university donors.

The closing remarks by Tyrus Miller, dean of the humanities school, made “apparent” that a trustee of the UCI Foundation, Mohannad Malas, was the “initiator and moving force” behind the screening, Glazer wrote.

In addition to serving as executive producer on “1948,” Malas (left) is a member of the dean’s leadership council in the UCI law school and the board that advises the university’s applied innovation program.

According to Glazer’s summary, the 40-minute question-and-answer session after the film “appeared to have been abruptly cut short,” with Miller “suddenly coming up to stage to conclude the proceedings.” Miller did not respond to a Fix query about why it was allegedly cut short.

Some audience questions pertained to the film’s editing process, while another “asked whether we are ready to leave our homes in southern California” and give the land back to indigenous people.

Co-director Ahlam Muhtaseb responded that it would take her “all night into tomorrow” to answer that “complicated” question, according to Glazer. Director Andy Trimlett said the issues with Native Americans and the United States are “very similar” to Israeli-Palestinian issues.

According to Glazer, Trimlett said he decided to end the film with a question because it’s “not his job to come up with a solution.” That question, as paraphrased by Glazer, was “how does one redress” the “historic wrong” of Israel’s establishment, if it was indeed wrong.

In a Jan. 29 email to the three deans she reproduced, Glazer said the proximity of the screening to International Holocaust Remembrance Day “calls into question” UCI’s commitment to “academic integrity and respect for minority communities.”

As support for her position, Glazer cited Benny Morris, an Israeli historian and professor of history in the Middle East Studies department at Ben-Gurion University of the Negev. She called him “the leading historian on the Palestinian refugee crisis,” who has said Israelis did not commit “systematic” ethnic cleansing in 1948 and that Palestinians bear “enormous responsibility” for starting the conflict. (Morris appears in “1948.”)

UCI “has a duty to challenge” the bigotry of such assertions and “ensure that students are fully-informed and exposed to diverse perspectives on controversial issues,” Glazer told the deans.

It  should “[p]ublicly condemn the anti-Semitic content and timing of the screening” and give the community the opportunity to hear from different viewpoints on the Israel-Palestine conflict, she wrote. If any professor required students to attend this screening or offered “extra credit,” they should be required to do the same for another event that challenge the film’s views.

Bill Maurer, dean of the social sciences school, responded to Glazer that the screening was not required for any class, and extra credit is never offered for just one viewpoint.

“We have always ensured that students and members of the public can benefit from a variety of perspectives on the Israeli-Palestinian conflict, or any other conflict, at UC Irvine,” he wrote.

Maurer went on to list partnerships with Israeli institutions, and noted a freshman seminar that was taught by a UCI expert on the Holocaust. The social sciences school sends students to Israel through the Olive Tree Initiative, he noted. (Spokesperson Vasich sent The Fix the same paragraph as Maurer sent Glazer about programs that show UCI’s “genuine commitment to Israel and the Jewish community.”)

The three deans agreed to host the screening because the filmmakers would be present and answer audience questions in a moderated discussion, Maurer said: “We hope that the event will provoke thoughtful, respectful and intelligent if intense dialogue.”

Glazer was not satisfied with the response to her concerns. Chancellor Howard Gillman should “publicly condemn this program” and specifically refer to the film, while expressing “regret” for having promoted a “clearly biased program,” she told The Fix. UCI should demand that the filmmakers remove its name from “any current or future publicity around the film.”

As a response to “1948,” Glazer said UCI should show a film such as “The Forgotten Refugees” and have a panel of Jewish speakers who had to “flee from Arab states and Iran at different points in time.”

The school could also host speakers such as Yossi Klein Halevi, author of Letters to My Palestinian Neighbor, and sponsor “a series of programs” on the topic of “contemporary anti-Semitism,” she said.

Spokesperson Vasich told The Fix that the Office of Inclusive Excellence will be hosting Oren Segal, director of the Anti-Defamation League’s Center on Extremism, in May.

The description for “Confronting Extremism” does not mention specific groups that promote “hate.” It cites Segal’s experience with tracking “extremist groups and movements from across the ideological spectrum” and how “ Americans of all religions, races and backgrounds are being reached and recruited by extremists online.”

Through the Confronting Extremism Initiative, 8 projects received grant funding. They represent diverse topics and innovative approaches to extend knowledge about some of society's most challenging debates. Stay tuned to hear more about each project! https://t.co/qWvsi0mBCs

Former UCI lecturer Fouse told The Fix he’s doubtful that UCI will host a pro-Israel speaker, as Glazer suggested, unless it’s publicly noted that such speakers “only appear on campus” at the invitation of student groups such as the College Republicans and Students Supporting Israel.

There’s a long history of Jewish events on campus being disrupted, he wrote in an email. “Around 2006, I became aware of intense anti-Israel activism on our campus,” including  “week-long anti Israel events” each year hosted by the Muslim Student Union and Students for Justice in Palestine.

He’s attended many of these events, which “not only trashed Israel, but the US as well and even Jews as people.” In 2017, SJP was placed on a 2-year probation after disrupting an event “featuring Israeli reservists.” (For most of his UCI career, Fouse was “an activist fighting anti-semitism” on campus, according to his bio for FrontPageMag.com.)

UCI has featured other anti-Israel events, including a 2001 speech by a Washington, D.C. imam who said: “You can take a Jew out of the ghetto, but you can’t take the ghetto out of the Jew.”

The UCI administration will “point with pride” at the Olive Tree initiative, as mentioned by Maurer in his response to Glazer, but this is a “thinly disguised effort to sway students more to the Palerstinian [sic] narrative,” Fouse told The Fix.

Though Fouse did not attend the screening, he wrote on his blog that he could tell it had a “Palestinian narrative.”

“What a hoot” that Mark LeVine, UCI professor of Middle East history who “has spoken at more anti-Israel events that he or I could count,” was the “‘moderator,’” Fouse wrote, using scare quotes.

Asked to comment on Fouse’s allegations about him, LeVine told The Fix in an email that Fouse’s retirement is “the best news I’ve heard in a long time.” He called Fouse “completely unqualified” as a lecturer, and Fouse’s comments about LeVine “about as relevant as his comments on australian rules football would be.”

LeVine said he has attended “zero” anti-Israel events, as Fouse described them. “When racist idiots who have no business teaching anyone anything want to lob non sequiturs, I have too much to do to spend much time answering.”