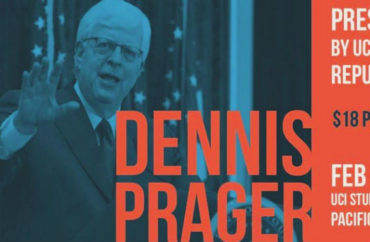 ‘It seems like the leftists get away with’ flouting the rules

A conservative student group accused the University of California-Irvine of bureaucratic shenanigans ahead of its Tuesday event with conservative columnist and radio host Dennis Prager.

UCI College Republicans President Kimo Gandall told The College Fix that he received a notice from the administration Thursday, less than a week before the scheduled event, that the club would not be allowed to seat the audience in the chosen venue until the moment the speech was scheduled to start.

The university claimed that a “security threat” required that seating happen right as the event begins, Gandall said in a phone interview. The club is talking to its lawyers about what to do next. 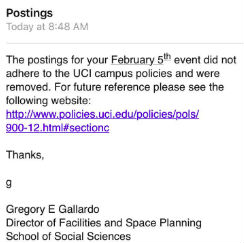 The seating situation is not the only gripe the club has. Gandall accused the university of selectively applying its flyer and sign policy to the CRs (left).

UC-Irvine limits flyers to one each in six sections of campus, and while the CRs don’t have a problem with the policy per se, Gandall said few clubs follow the rules – “and it seems like the leftists [below] get away with” flouting them.

Asked to respond to the club’s allegations, an administration spokesperson initially did not speak with any specificity about what UC-Irvine required the club to do, and on what grounds.

Pressed on what the university considered a security threat, the spokesperson cited logistical hurdles.

Early Tuesday morning, after a day of “heated discussions,” Gandall told The Fix in an email that the administration “backtracked” after he appeared on Prager’s radio show Monday. The club is now allowed to “stream the event and enter at 6 [p.m.], not 7,” as it requested. The Fix is awaiting the university’s confirmation of this. 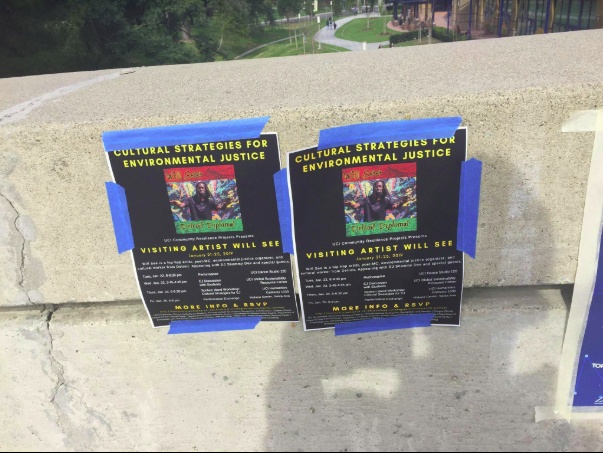 ‘They can’t directly stop us, so they have constructed a Kafkaesque bureaucracy’

The club has been planning the event with Prager since November, and was under the impression that it would be able to begin seating an hour early at 6 p.m., according to Gandall.

The CRs also planned on showing the State of the Union address, which was moved a week later this year because House Speaker Nancy Pelosi refused to schedule it during the government shutdown, while people filed into the venue. The university allegedly told the club that it couldn’t do this either because it hadn’t informed the police earlier, Gandall said.

The university rebuffed the club again when it requested permission to seat attendees at 6 p.m., saying it would “be a threat to the university,” according to Gandall.

The CRs believe the university’s bureaucratic maneuvers are aimed at sabotaging the event.

All the club wants is to “be allowed to sit people at a reasonable time prior to Dennis Prager being scheduled to start speaking,” Gandall said, citing a quote by Prager that “faceless bureaucrats” have caused more harm than “the worst tyrants in the 21st century.”

He credited the university with “getting smarter” as a result of the prior work of the CRs’ lawyers at FreedomX, which has successfully represented conservative students in speech-related disputes with public colleges.

MORE: FreedomX gets U. Washington to end punitive security fees on CRs

Administrators “know they can’t directly stop us, so instead they have constructed a Kafkaesque bureaucracy that is impossible to navigate, similar to the IRS. This gives them the capability to nearly reinterpret the code whenever it suits them,” Gandall told The Fix.

“While we might not win this battle due to these archaic regulations, we intend to directly bring the fight to the bureaucracy in the future,” he said.

It’s not Gandall’s first time taking on a college for its perceived hostility to student speech. At a Coast Community College District board meeting nearly two years ago, he was one of several Republican students to protest the faculty award given to an instructor, Olga Perez Stable Cox, who lectured her class on Donald Trump’s election as an “act of terrorism.”

A university spokesperson did not initially respond to specific allegations by the CRs, including the “security threat” language attributed to the administration.

Asked if UCI was using bureaucracy to hamper the event and discourage attendance because of its conservative message, Tom Vasich told The Fix in an email that the university is “legally prevented from interfering with the free speech by student organizations and guest speakers as long as they follow campus regulations and local, state and federal laws.”

Vasich said the university “encourages and appreciates spirited debate on a variety of issues, including those that may be controversial or provocative,” and “such debate often helps build bridges of understanding between groups. The exercise and protection of freedom of speech and expression are at the core of the university’s mission of teaching, research and public service.”

The spokesperson then referred The Fix to UCI’s policy on free speech and academic freedom.

When The Fix pressed Vasich to specify the university’s security concerns, as cited by the CRs, he responded Monday that the CRs asked for the start time to be moved an hour ahead to 6 p.m.

“Logistically, that is not possible for staffing and technical set-up reasons, and the time change at this late could not be accommodated,” Vasich wrote.

UPDATE: UC-Irvine spokesperson Tom Vasich responded to a second Fix query after this story was published about the university’s alleged security concerns. His response has been added. CRs leader Kimo Gandall told The Fix Tuesday morning that the administration gave in after he appeared on Dennis Prager’s radio show Monday. The Fix is awaiting confirmation from the university.