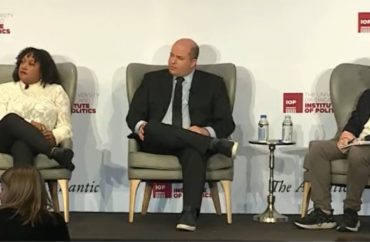 A group of conservative University of Chicago student journalists challenged CNN’s Brian Stelter and other speakers at a “disinformation” conference last week on campus.

The Atlantic and the University of Chicago’s Institute of Politics hosted the conference, titled “Disinformation and the Erosion of Democracy.”

Journalists with the Chicago Thinker, a conservative publication on campus, organized a series of questions during the conference.

Student Christopher Phillips asked CNN’s Brian Stelter about his network’s reporting that “push[ed]” stories that said Justice Brett Kavanaugh was a rapist, that actor Jussie Smollett was the victim of a racially charged attacked in Chicago and that President Donald Trump won in 2016 with the assistance of the Russians and Vladimir Putin.

“I think you’re describing a different channel than the one I watch,” Stelter said. “But I understand that that is a popular right-wing narrative about CNN.

WATCH The Atlantic’s @anneapplebaum refuse to answer @RealDSchmidt‘s🔥🔥 question about Hunter Biden’s laptop during @UChicago’s “Disinformation and the Erosion of Democracy” conference! pic.twitter.com/1OgXBBiiI0

“I don’t find it to be interesting,” Applebaum told Schmidt.

“I think it’s just an example of how journalists, the elite ruling class, view what Americans care about as irrelevant to them and as not worthy of any attention,” Schmidt told Fox News.

Daniel Schmidt on Anne Applebaum dismissing the Hunter Biden laptop story: “I think it’s just an example of how journalists, the elite ruling class, view what Americans care about as irrelevant to them and as not worthy of any attention.” @RealDSchmidt pic.twitter.com/567xBYIShl

Watch the full clip of @evitaduffy_1 on FOX and Friends here: https://t.co/zlseqYttBX

“Wait a second! Run that back…” @chrispthetruth absolutely DESTROYS @CNN and @brianstelter on @TuckerCarlson!! pic.twitter.com/HJtf140Qbe

“The media has been trying to shut this [the Hunter Biden laptop story] from the moment we heard about it,” Duffy told Fox News. She said her publication organized beforehand to ask “tough questions” and “report.”