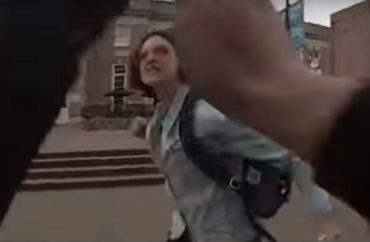 Created Equal is controversial in the pro-life community because it uses images of aborted fetuses – both intact and torn apart – to shock the conscience of passers-by.

The pro-life group, which takes its name from Martin Luther King Jr.’s quotation of the Declaration of Independence, has a large and unavoidable display that participants must pass each year at the national March for Life.

But the group also spreads its message on college campuses, where the typical response is more severe than critical words.

A student at the University of North Carolina was so offended by a Created Equal display that she beat up one of its interns, Austin Beigel, as documented by video taken by Created Equal. (The group’s activists all wear bodycams, for obvious reasons.)

Jillian Ward wasted little time once she saw the display “Did y’all put these up? Is this you?” the student asked, lunging at Beigel and socking him several times while apparently crying:

Ward’s “arrest by citation” by campus police is not captured in the video, which shows officers telling Created Equal that Ward would be charged with misdemeanor assault. They said they wouldn’t put her in handcuffs, but “she’ll still have to go to court.”

The Daily Caller News Foundation obtained the arrest citation, which said Ward allegedly hit Beigel in “the face and stomach with her fist.”

The incident happened April 2, but Created Equal didn’t publicize it until Monday, when it teased the video drop for Tuesday.

Fox News reports that Ward is expected to make a court appearance next month. It described Ward as a “pro-choice feminist and aspiring journalist.” Her Facebook page is still public, and it’s now overrun with critical comments about her documented response to Created Equal. One commenter asks why she’s not being charged with a federal hate crime.

Campus and mainstream media have yet to cover the assault that The College Fix can find. The Daily Tarheel did not mention either the original assault or Created Equal’s video, posted more than a month later.

Ward isn’t the first college student to be charged with a crime for attacking Created Equal. Thomas Metcalf at the Indiana University-Bloomington was charged with disorderly conduct, vandalism and theft for trying to steal and vandalize its signs during the first week of Created Equal’s campus tour.

That incident was unusual because Created Equal’s video showed multiple university officials were already on the scene when Metcalf started raising a ruckus, suggesting that agents of the government were monitoring the pro-life group’s activism.

The university refused to identify any officials in the video, including one who helped Metcalf get away in his car.