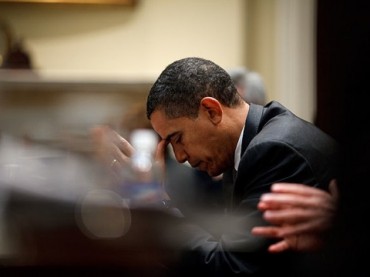 A Youth Misery Index that measures young Americans’ woes has skyrocketed under President Barack Obama and hit an all-time high.

The index, released Wednesday, was calculated by adding youth unemployment and average college loan debt figures with each person’s share of the national debt. While it has steadily grown over the decades, under Obama the figure has shot up dramatically, from 83.5 in 2009 to 98.6 in 2013.

The index has increased by 18.1 percent since Obama took office, the highest increase under any president, making Obama the worst president for youth economic opportunity, according to the nonprofit that released the figure.

“Young people are suffering under this economy,” said Ashley Pratte, program officer for Young America’s Foundation, which developed the index and calculates it annually using federal statistics. “They’re still living in their parent’s basements, unable to find full-time jobs that pay them what they need in order to pay back their debt.”

Youth unemployment in 2013 was 16.3 percent, and student loan debt came in at a record-breaking average of $29,400 last year, the foundation points out; what’s more, each person’s share of the roughly $17 trillion dollar national debt stands at its highest level ever: $52,948. “We are racking up this huge tab,” Pratte said in an interview Wednesday with The College Fix. “Young people have no part of this debt, but it’s the generation that has to deal with it.”

The foundation argues “there appears to be a statistically significant relationship between government expenditures and the Youth Misery Index.”

“Under the Obama administration alone, the YMI has increased by 18.1 percent, the highest increase under any president, making Obama the worst president for youth economic opportunity—not quite the hope and change many young people were looking for.”

Pratte said this represents a prime opportunity for conservatives.

“This entitlement society is perpetuated by the Obama administration,” she said. “You want health care, we’ll give it to you for free. That was a promise, and young people are inclined to expect these things.”

“When they realize, ultimately, they have to pay for it, this is an opportunity for conservatives to get their message out there. … Young people are really adverse to government intrusion.”