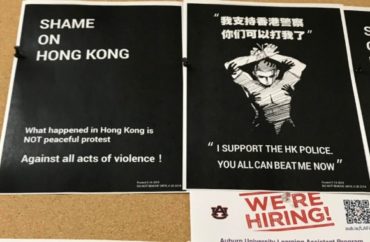 ‘What happened in Hong Kong is NOT peaceful protest’

Hong Kong protesters appropriated the American flag in their fight for democracy against the Chinese government. But the admiration is not mutual for some at an American university.

Fliers shaming the Hong Kong protesters were hung at Auburn University, according to Reddit users who reported seeing them in various parts of campus.

It started with a user who spotted fliers posted on a board in the Haley Center on Aug. 20. “Shame on Hong Kong,” one read.  “What happened in Hong Kong is NOT peaceful protest.”

The other flier has a man with his hands tied together, and the quote: “I support the HK Police. You can all beat me now” (both above).

The fliers appear to have been approved by the university: They have an original posting date (Aug. 14) and a permitted removal date (Aug. 28). The Haley Center is “a classroom facility as well as home to the College of Education, AU Bookstore, administrative offices and one dining option,” according to Auburn.

“This is insane. The flyers are supporting the egregious human rights violations perpetrated by the Chinese government in Hong Kong,” the Reddit user wrote, clarifying he was not Chinese.

Other users also reported seeing the fliers in a different part of the Haley Center, the Ralph Brown Draughon Library, Student Center and Foy Hall, which hosts the Office of International Programs.

The Reddit thread came eight days after Hong Kong International Airport canceled all its flights due to thousands of pro-democracy protesters flooding the main terminal, according to the Associated Press.

Even though no violence was reported at this protest, back in Beijing, China’s Hong Kong and Macau Affairs Office released a statement claiming the protests were “beginning to show the sprouts of terrorism” and were an “existential threat” to the rest of Hong Kong. Beijing includes nonviolent protests against the government in its definition of terrorism, according to the AP.

A university spokesperson wrote in an email to The College Fix last month it was “aware” of the fliers and is “looking into the matter.”

But he didn’t answer whether Auburn has launched a formal investigation, who would investigate, whether it has any suspects or whether the fliers violate any campus policy. Auburn has a Bias Education Response Team (below) that includes a high-ranking campus safety official.

Fliers at Auburn are evaluated based on the “standards of the Campus Distribution Policy,” according to the statement provided by the spokesperson.

Asked how the university can handle the incident under its own policies, given its “green light” rating by the Foundation for Individual Rights in Education, the spokesperson said it will “uphold the values and standards” of the campus, which includes “free expression for our students.”

“Auburn supports an open dialogue of feelings, thoughts and ideas that lead to civil discourse and intellectual discovery,” the statement concluded.

Prof. Carolyn FitzGerald, the advisor of the Chinese Club at Auburn, did not respond to several emails and calls from The Fix asking how the club felt about the incident.

Not the first China-related flier incident this year

The university also gave a vague answer to the Reddit user who originally called attention to the fliers. He said that “the person who oversees these kinds of conduct issues” told him that Auburn “is aware and people across campus are working on it.”

Students started taking the matter into their own hands, according to another Reddit user who said “people have been removing the ‘not’ before peaceful protest” on fliers posted in Foy Hall.

The original user said he looked up Auburn policies on fliers, which primarily regulate the dimensions and length of time they can be posted, but not the content.

“However, they do say they have to follow the harassment policy, and that policy contains a section for banned stuff that’s (paraphrasing here) obviously and egregiously offensive to the population as a whole/detrimental to the university’s mission and principles,” the user wrote.

It’s the second China-related flier incident at Auburn this year.

“All the Chinese Students HATE Chinese Student Organization,” the flier read, with an “X” over a picture of “CSO Auburn University,” the Auburn Plainsman reported.

The Fix asked Auburn if it found anything from this previous investigation, but the spokesperson dodged the question. All fliers are evaluated based on university standards and “those that met the standards stayed up and those that did not were removed,” the spokesperson wrote in an email last week.

The interim president of the CSO during this incident, Wei Yi, told the Plainsman that the club was “very shocked” and confused by these fliers.

“CSO has made many efforts to support Chinese cultural events and education about Chinese culture on campus, and their hard work is sincerely appreciated by many faculty and students,” said FitzGerald, the undergraduate advisor for Asian studies with a Chinese focus.

Yi said anyone who had an issue with CSO should come and talk to club leaders because they “would like to be able to communicate to solve any problem.”

The Plainsman pointed to a New York Times article from 2017 that addressed the Chinese government having influence in Chinese organizations at campuses in America. Yi said the CSO is a “non-political organization,” however.

“We have never promoted any government agenda or attempted to curb or suppress any speeches as we fully support freedom of speech as well as freedom of academia,” according to Yi.