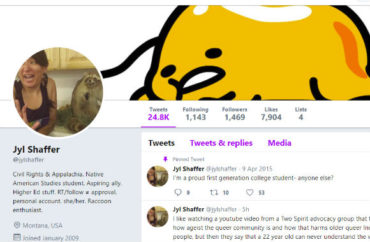 Jyl Shaffer has the dubious distinction of being named as a defendant in two Title IX-related federal lawsuits at two universities by students accused of starkly different violations.

The Title IX coordinator left the University of Cincinnati a year before the first was filed – the case is not going well for UC – but the second suit appears to have caused Shaffer’s fall from grace at Montana State University.

The Bozeman Daily Chronicle reports that Shaffer had a “change of status” in early August, leaving her position as MSU’s Title IX coordinator and director of the Office of Institutional Equity. She’s now an adjunct instructor in Native American studies, as confirmed by her LinkedIn page.

Her investigator in the Title IX office, James Sletten, left his position nearly two years ago, right after the investigation at the heart of the lawsuit. The university refuses to explain the change for either, citing their “personal privacy” but not any legal obligation.

Former student Erik Powell sued MSU and several individual employees a year and a half ago, among them Shaffer, Sletten, Provost Bob Mokwa and instructor Katharine Kujawa, who taught his “Contemporary Issues in Sexuality” class. The suit said they were biased against him “because he’s a straight male.”

The most recent version of Powell’s suit, naming just the university, Shaffer and Mokwa as defendants, was filed a week after Shaffer’s change of status. MSU uses a “single investigator” model for Title IX cases, where Shaffer served as prosecutor, judge and jury. Powell contends the model is unconstitutional and violates due process.

“According to court documents, this [Powell] case was Shaffer’s first major investigation at MSU” after she left UC, the Daily reports:

His lawsuit charges that the university violated his constitutional rights in 2016 by banning him from the Bozeman campus in the summer and fall semesters, after he privately voiced his objections to transgenderism to an instructor [Kujawa], comments he contended were misconstrued as threatening violence. …

The lawsuit alleges after the transgender student filed a complaint with the Title IX Office, neither Aaron Grusonik of the MSU dean of students office nor campus police thought the male student’s comments were serious threats that warranted his suspension, but Shaffer called the case “cut and dried” and had him kicked off campus.

Shaffer and Sletten consistently showed bias toward the transgender complainant, according to Powell.

The Title IX coordinator called herself “an aspiring ally” and said “I’m grateful you trusted us” in an email to the student, and offered to help the student find work or academic help. As for investigator Sletten, he “offered to give the transgender student a ride to a Big Sky Pride Parade,” according to the Daily.

Earlier this year she also left her role as an “affiliated consultant” for The National Center for Higher Education Risk Management, a Title IX consulting practice.

It appears Shaffer held the position when she investigated Powell, and as described on her LinkedIn profile, the NCHERM role could have undermined her required neutrality at MSU:

Contracted assistance to institutions with a focus on victim services, LGBTQ-serving programs, and effectively serving communities of color. I specialize in training, program development, and policy and procedure development.

Her LinkedIn profile says she left the group in February, even though she was named in NCHERM’s “flip book” of “experts” dated March 1.

Shaffer is no shrinking violet on social media, an “ardent advocate for transgender and transsexual individuals” who also bashes straight males, according to the suit. She tweeted an article on “entitled toxic masculinity” this year, calling it “accurate AF [as fuck],” among other examples of “anti-male beliefs.”

Her Twitter account is still opinionated, particularly on indigenous issues, but it went dark Aug. 2-4, the time period when her status changed. She has yet to mention the change clearly on Twitter.

A tweet last week makes clear that Shaffer had no experience teaching a college class until she left her Title IX position and was given the instructor job.

About to teach my first college-level course. pic.twitter.com/SbmyJHZlS3

She’s also still talking about toxic masculinity and how it “kills” people and “hurts us all.”

The university responded to the lawsuit Aug. 24, saying Shaffer should be dismissed as a defendant because of her changed status.

She was removed as Title IX coordinator just a week after U.S. District Judge Sam Haddon rejected MSU’s motion for summary judgment and approved Powell’s opportunity to file an amended version of the suit, the plaintiff’s fourth.

According to the Daily, the public university argued that Powell had limited free-speech rights as a student: He was appropriately restricted from “making statements that discriminate against members of protected groups and interfere with those students’ education.”

MORE: How Jyl Shaffer figures into the anti-male bias lawsuit against UC