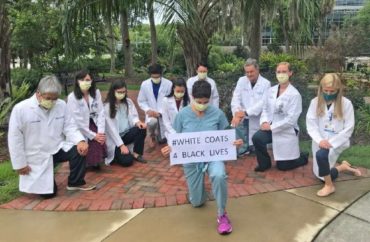 The University of Florida College of Medicine removed “anti-racist” content from its website following a report on the influence of social justice ideology on its curriculum and practices, The Washington Free Beacon reported on Wednesday.

Do No Harm, an association of healthcare professionals opposed to identity politics in medicine, released a report on the school on November 22.

A week after the publication of the report, the College of Medicine has taken down at least three activist messages posted to its website, according to The Free Beacon.

A “White Coats for Black Lives” photo and the Black Lives Matter” slogan on the university’s old admissions website (pictured below), captured in the report, no longer appear on the school’s revised admissions page.

“UFCOM subscribes to ideologies that endorse ‘equity’ and ‘anti-racism,’ and it implements critical race theory (CRT) into its official academic practices,” the report stated.

“CRT activists tell academic institutions that they are systemically racist and must be fundamentally transformed,” it continued. “The problem is that the concepts and principles of CRT are utterly discriminatory in their implementation, as they dictate that people be treated differently based on race and identity.”

The school’s admissions page also included a list, “Anti-Racism Training and Resources,” which describes itself as the “hub for all things Anti-Racism,” according to the Do No Harm report.

The Office of Admissions also suggested several books advocating an ‘anti-racist’ ideology, including “White Fragility” by Robin DiAngelo and “Me and White Supremacy” by Layla Saad, the report stated.

The University of Florida College of Medicine’s “Diversity Statement” declares that it will “actively enhance the recruitment and retention of underrepresented groups to its student body, residency training programs, faculty and staff positions,” according to the report.

“We have a holistic admissions process that welcomes students from all backgrounds, including those from underrepresented backgrounds,” Hawley told the paper. “In accordance with state law, our admissions policy does not favor or give priority to any group.”