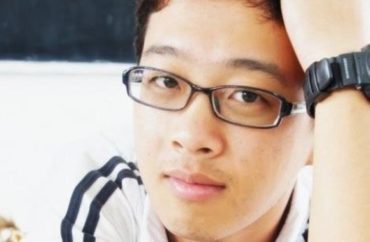 University of Illinois student Yidong Chen lives off campus in Urbana with his mother, who is at high risk for COVID-19. He’s a fully remote student in the fourth year of a doctoral program and doesn’t come to campus for classes, or leave the apartment except for essential activities.

For some reason the taxpayer-funded institution requires even students who would never set foot on campus to come to campus twice a week for COVID-19 testing, if they live in the surrounding communities.

Chen (above), who goes by Ivor, didn’t know this. He was only tested three times during the fall semester.

The masked student arrived to take a certification test Dec. 11 at an off-campus building with no stated university affiliation, but which is actually university property. Unable to provide two negative COVID test results from the past four days, as ordered, Chen left immediately.

Less than two weeks later, he received a noncompliance charge. This semester, Chen applied for a little-advertised testing exemption, which was granted a week before his disciplinary hearing.

Regardless of the university’s belated recognition that it’s pointless for Chen to come to campus to be tested, UI dismissed him for a year based on his accidental noncompliance in the fall. He could reapply for admission in a year, subject to several conditions. Call it a hopeful expulsion.

Chen is an international student, and the finding against him would have resulted in his and his mother’s deportation.

Fortunately for the student, he’s a member of the Graduate Employees’ Organization, which filed a formal grievance against the university. It also launched a petition demanding UI rescind the punishment and change its practices around the communication of COVID-19 protocols to students.

The petition, which is above 37,000 signatures as of Thursday night, accuses the administration of setting nonsensical rules for remote students who are following COVID safety protocols off-campus. The university requires Chen to “increase the risk to himself, his mother, and the campus community.”

The pressure worked and the university readmitted Chen last week, holding his dismissal in “abeyance” as long as he fulfills other requirements, according to Inside Higher Ed. Chen still must kiss the ring by writing two 1,000-word “reflective essays” and completing 25 hours of community service, down from 80 hours in his original punishment.

He told the publication that while he agrees the university “should have power implementing its own rules and regulations,” its power “over students’ destinies is immense. At the very least, the university administrators can apply that power with caution.” UI’s testing regime is one of the strictest in the country, Inside Higher Ed claims.

Sent him a ‘generic email’ without his name, told him not to respond

The grad student union isn’t letting the issue lapse, accusing the university of releasing “unclear and evolving instructions” on virus testing protocols throughout the fall. Chen reasonably believed he wasn’t subject to on-campus testing requirements, and the university didn’t give him sufficient notice, the petition says.

He later learned the administration sent him a “generic email addressed to ‘student'” in September, not identifying Chen by name, that served as his noncompliance warning. Yet the email explicitly told him not to respond and instead to wait for contact from a “case coordinator,” who never contacted him:

The GEO believes it is an unreasonable practice to notify students of possible impending discipline via mass email with no individual salutation … Ivor does not recall receiving this email, but even if he did, the question becomes: Does missing one email while sheltering in place warrant dismissal?

The union is similarly aghast at Chen’s Jan. 29 disciplinary hearing, also attended by one of its representatives. The hearing panel launched “several irrelevant, demeaning, and unreasonable lines of questioning” and set his far-reaching punishment after “less than 10 minutes of deliberation in closed session:

Despite the union grievance and letters from senior department officials arguing that Chen’s “victimless offense” didn’t warrant dismissal, and knowing full well he and his mother would be deported, the university appeal committee “callously and hastily decided to dismiss Ivor anyway,” the petition says. That happened Feb. 11.

The union warned that it would go to the mattresses for Chen, starting legal arbitration if the university didn’t back down.

Just five days later, after the petition quickly drew 18,000 signatures, Chen said the disciplinary committee removed the dismissal and ratcheted down the other punishments.

He proposed a revised disciplinary regime with sanctions that are “nuanced, tiered and educational in nature,” starting with a “written personal notice” of noncompliance with explicit exemptions for “special conditions,” an “informal meeting” with the COVID response team for a second notice, and formal disciplinary process for the third.

Chen wants local medical opinion to “assess the impact of the alleged noncompliance,” with no interference from the disciplinary office, and for graduate researchers like him to be treated like remote faculty and staff, who have an “automatic exemption” from testing.

Provost Andreas Cangellaris told The News-Gazette that the disciplinary process “affords students due process” and that sanctions are not issued “lightly, nor without warning,” but refused to answer the union’s allegations.

Spokesperson Robin Kaler also ignored union allegations about the callousness of the appeal committee, which knew Chen had been granted an exemption for the spring and that the sanction would lead to deportation for him and his mother.

She told Inside Higher Ed that the university has “broadly, regularly and frequently communicated” COVID-19 protocols. Kaler emphasized the procedural protections for accused students, including reconsideration when “new evidence that could have affected the outcome of the appeal” becomes known “within a reasonable period of time.”

Read the petition, which links to more documentation, and reports by Inside Higher Ed and News-Gazette.