After facing scrutiny and concerns, including from some state lawmakers, the University of Iowa has canceled a white privilege workshop scheduled for this month.

“Diversity, Equity, and Inclusion leadership became concerned that the confusion and misinformation surrounding the title of workshops could mar the event for this year’s attendees,” campus spokesperson Jeneane Beck told the Gazette. “As a result, the workshops for this spring were canceled to give the university the necessary time to meet with concerned stakeholders and address any concerns or misperceptions.”

The University of Iowa ignored multiple requests for comment by The College Fix.

The university’s white privilege workshops launched in 2017 soon after the election of President Donald Trump. According to Beck, campus staff members wanted a way to discuss subjects regarding diversity and privilege. 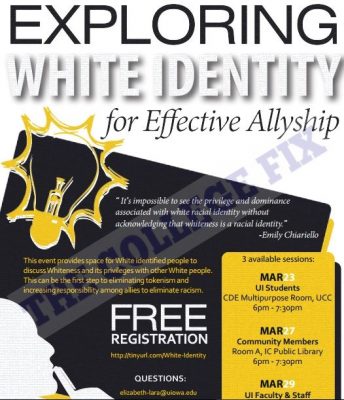 “The workshops first began in the spring of 2017 and were developed at the request of faculty and staff members who identify as white and had attended other training sessions related to race and specifically wanted an opportunity in which to discuss ways to support inclusiveness,” Beck told the Daily Iowan.

But this month’s iteration, “Understanding Your Whiteness to Become Better Allies,” was canceled.

“In preparing for this year’s workshops, it became clear the university needed to do additional work to educate our broader community and stakeholders about the purpose of these events, which has been misconstrued by online publications,” Beck told the Iowan.

But it’s unclear what she meant by misconstrued, and in fact it was campus leaders themselves who revamped descriptions of the campus events online after they gained the attention of The Fix.

Last November, The College Fix reported on another planned white privilege workshop at the University of Iowa that had originally been described as an “interactive workshop … for people who want to learn about and discuss the inherent privileges that come with being White. This can be the first step to eliminating false diversity and assuming greater personal responsibility for eliminating racism.”

The university then altered the description for the whiteness workshop shortly after The College Fix asked about language used in the event description, but The Fix had retained screenshots of the original wording.

“After receiving feedback from some campus partners, we realized we may have been unclear with our language and have since updated the description to more directly align with the workshop’s learning goals,” Diversity Resources Director Brianna Marcelo told The College Fix at the time.

The event’s description was changed to tell students that the workshop “can be the first step for self-reflection and assuming greater responsibility for eliminating racism.” The term “false diversity” was deleted from the event with no explanation on the website. No officials from the university ever responded to clarify what was meant by “false diversity.”

Fast forward to this month, and state Rep. Steve Holt, chairman of the House Judiciary Committee, said the campus events prompted some concern among himself and other lawmakers.

“The workshop in question had a name that even the university admitted was not a good choice. Our concerns related to the name and the content, and I informed the university that while we can certainly talk about bias, we must do so in the proper context, within a conversation that should also include what unites us,” Holt, a Republican, told The College Fix.

“I believe we have to be very careful holding classes that, while they may be well meaning, actually serve to divide us as Americans. It is important that we focus on what unites us.”

He told the Gazette that lawmakers requested more information about the content of the workshops and plan to meet with administrators.

While the event has been canceled for the time being, campus officials have signaled plans to relaunch these workshops after the university resolves these issues.

Meanwhile, Drake University religion Professor Jennifer Harvey, who has attended white privilege events at her university in the past, said she is surprised to hear about the cancellation.

“It’s not only inappropriate, but very distressing that this important workshop was cancelled—especially at an institution of higher education. Unjust racial conditions in our society are what cause disunity. You cannot ‘create unity’ by suppressing fact- and evidence-based discussions,” Harvey told The Fix.

“It is simply accurate to say that white U.S.-Americans, in Iowa and every other state, experience systemic advantages that people of color do not. Only as more white U.S.-Americans take this seriously and help end it, then we will have more unity. And that work is precisely what the white privilege conference is committed to enabling.”