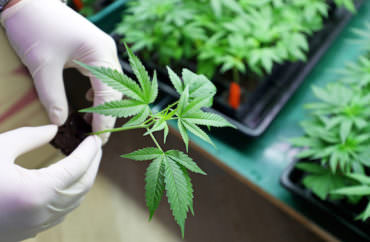 Northern Michigan University now offers a degree in Medicinal Plant Chemistry in what seems to be the first four-year undergraduate degree program of its kind.

“The historical stigma associated with cannabis is quickly vanishing, and although there is a surge in businesses related to the marijuana economy, there is a major gap in educational opportunities available to prepare people for this field,” the university’s website states.

“No other 4-year undergraduate degree program in the world combines rigorous coursework in chemistry and biology with research and hands on instrumental analysis built into the curriculum to prepare its graduates for a career in the cannabis industry.”

Launched this semester, the program aims to “prepare students for success in the emerging industries relating to medicinal plant production, analysis, and distribution,” states the program description.

In order to graduate with the degree, students must choose from a range of courses in organic chemistry, plant biology, medical plant chemistry, and entrepreneurship, according to the degree requirements page.

“The new Medicinal Plant Chemistry degree was created to produce graduates who are analytical chemists. The program adheres to the highest industry standards and regulations and focuses on analyzing, precisely measuring and extracting active ingredients of medicinal plants, including cannabis,” Derek Hall, a spokesman for the university, told The College Fix via email.

Students involved in the program will not actually grow marijuana, according to Hall.

However, Hall did confirm that while students won’t actually grow marijuana, they will still have the opportunity to work with it.

While 29 states and D.C. have laws broadly legalizing marijuana in some form, the federal government still outlaws it.

Hall said the university has not faced any pushback from the federal government in offering this degree.

“All state and federal laws are followed in the teaching of the degree,” Hall told The Fix. “We have not had any issues with state or federal oversight.”

Katherine Pfaff, a spokeswoman for the Drug Enforcement Administration, told The Fix via email that in order to avoid violation of federal law, “universities and researchers must be in compliance with the Controlled Substances Act, which would require researchers to be registered with the DEA.”

Asked if the researchers, students, and professors in the degree program were registered with the DEA, Hall said that the university only uses “exempt preparations.”

When asked what kinds of job opportunities graduates of the program can expect Hall told The Fix that the curriculum prepares students for careers in “the laboratory analysis sectors of the cannabis, natural products, food chemistry or vitamin supplement industries.”

While some universities offer classes on marijuana policy and the law, and others operations such as THC University and Clover Leaf University in Denver offer marijuana certificates, Northern Michigan University appears to be unique in its breadth and scope, reports The Detroit Free Press.

And The Washington Post reports that one required course is called “Chemistry 420” — an ode to 420, a slang numeral celebrated by pot smokers.

The class “is an advanced analytical course where students study various classes of bioactive compounds and their plant origins and metabolite chemistry. The syllabus includes the history of medicinal plant use and cannabis chemistry, along with a lab in which students will perform plant tissue extraction for alkaloids and terpenoids and study purification procedures of different plants,” the Post reports.