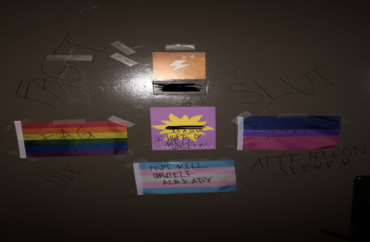 The University of San Diego won’t say whether it will publicize the results of an investigation into an alleged hate crime, even if it turns out to be a hoax, a spokesperson told The College Fix.

In late October, the USD Vista reported that freshman student Eleanor Wheeler, who identifies as “gender non binary,” found a series of homophobic messages written on the door of Wheeler’s dorm room.

The messages told Wheeler to “kill yourself already” and called the student a “fag” and a “slut.” The choice of slurs is unusual because Wheeler is publicly in a committed relationship with a transgender man.

USD spokesman Daniel Tellas said the Catholic university is cooperating with the San Diego police department on the investigation, but “our commitment to protecting student privacy restricts our ability to share further details of this incident.”

He wrote in an email: “As USD President James T. Harris III stated in a campus-wide email on the day of the incident, USD disavows acts targeting race, gender identity, gender expression, sexuality or any action that denigrates the human dignity of individuals. The university encourages those who might be impacted by an incident of bias and hate to access the counseling and other support services available.”

In a statement describing the incident on Twitter, Wheeler said that upon going to the bathroom at 3:30 a.m., the student discovered that slurs and other messages were scrawled on pride flags on the door.

It is unclear from Wheeler’s description of the incident if the vandalism was discovered after returning from the bathroom, or before going. But none of the slurs included is specific to Wheeler’s gender identity and sexual orientation. The student is open on Twitter about being in a relationship with a transgender man named Kristian, posting photos of the couple.

The vandal scrawled that Wheeler was an “attention seeker,” indicating that the perpetrator likely knows a fair amount about Wheeler.

Wheeler occasionally blogs, self-describing as a “18 year old accomplished activist, speaker, and writer” that happens to “be chronically ill.”

Wheeler founded a “social movement” called “We Exist” that is “dedicated to creating an accessible and accommodating space for activists with disabilities while bolstering the voices of disabled activists that are often forgotten,” according to its website. The student also sells artistic creations from an online store mentioned in Wheeler’s Twitter bio.

After discovering the hateful messages on the door, Wheeler said “I sat there, shaking, unable to force myself to move and get up. I thought maybe I’d just stay there forever and give up and give in. Finally i stood up and the blood in my body was replaced by pure and utter terror, I ran to the bathroom and threw up out of sheer revulsion.”

The Vista reported that the USD student government hosted Wheeler at a recent meeting, where the issue of administrative accountability was a hot topic, with students calling for administration officials to be more accessible to students.

The report mentioned that another student at the meeting, Alanna Bledman, said “There is this sort of underground secret network of students who are on call and ready to go whenever and for whatever. Me and my friends are infiltrators of systems. We get in these meetings and we get into these buildings and we make sure we do not leave until change happens.”

MORE: Not a hate crime: ‘Noose’ at U. Michigan hospital was a fishing knot