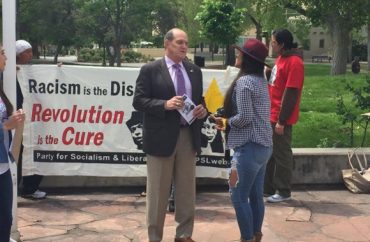 ALBUQUERQUE — There’s nearly 30,000 students at the University of New Mexico, and about 665 of them want its longtime seal to be abolished, saying it’s racist because it has a conquistador and frontiersman on it.

Those complaints — along with demonstrators telling the university president he has “blood on his hands” — have prompted campus officials to agree to review the seal and possibly change it.

The university’s Board of Regents and president have asked campus officials “to gather opinions from students, staff, faculty, alumni and community members regarding the seal,” Lorena Blanco-Silva, program manager for equity and inclusion, told The College Fix via email. A series of forums will be held throughout the summer and fall, then a report will be presented to the president and board, she added.

“If it is to be changed, it will be done so with input from all the constituents listed and will take time to implement (at least a year),” she told The Fix.

The process has already begun. The Office of Academic Affairs sent an email to University of New Mexico students inviting them to a brainstorming session on May 12 where students could discuss, draw and write their ideas for a new seal. A community forum is slated for June 16.

The effort can be traced back to a relatively small but vocal group of students, mostly members of The Red Nation and The Kiva Club.

According to its website, The Red Nation is an activist organization for Native Americans “dedicated to the liberation of Indigenous peoples from colonialism.” The Kiva Club is a student organization that serves to “preserve and encourage the growth of cultural values and identities of Native American students.”

They launched a Change.org petition demanding “abolish the racist seal.” To date, 664 people have signed it, likely a combination of students, professors and community activists. The groups also held a community forum on April 3 as part of their campaign to abolish the seal, saying it is offensive toward Native Americans.

“I will be the first of my nation to earn a doctorate degree, and to have this [seal] on my diploma is an insult of the highest order,” said The Red Nation co-founder Nick Estes, a PhD student in American Studies at the University of New Mexico, at the event. “It’s not necessarily just about abolishing the seal. It’s about changing the structural relationships of power with indigenous peoples in the state of New Mexico, but also the Southwest and beyond.”

In an appeal to the forum, Estes explained why he feels the University of New Mexico not only “profits from the genocide of indigenous peoples and the occupation of indigenous lands” but how “UNM’s official seal celebrates this fact.”

The seal was originally designed in 1909 by president Edward Grey, officially adopted in 1914, and formerly ratified by the Board of Regents in 1969. It displays two New Mexico founders, a conquistador and a frontiersman back-to-back armed with a sword and a musket, called “weapons of conquest” by protesters.

Estes also claimed at the forum that the university gets most of its funding from state leases that are located on sacred land, and profits nearly half a billion on natural resources from indigenous lands.

Something left out in the community forum, however, was how a Native American artist contributed to the seal. That was not discussed at all during the event.

In 1994, the Regents granted a Meritorious Service Medal to Theda Douglas Rushing, who was an indigenous artist. Not only did she research the seal, but she also designed and sewed the university’s first official seal that was later replaced after regents said it was too complex to reproduce.

Nearly three weeks later, in the last week of April, The Red Nation and the Kiva Club held a rally outside of UNM President Robert Frank’s office over the seal and other demands.

The organizers called the rally a “speak-out,” and it attracted about 100 students, faculty and community members, according to the socialist publication Liberation News.

“It was clear that UNM President doesn’t stand with his students against racism and couldn’t even listen to his own students when he fled his office for a ‘meeting’ at the beginning of the speak out,” it reported.

After the rally, protesters marched to the president’s office to deliver a list of demands and petition signatures in support of abolishing the “racist” seal. When protesters confronted Frank he reportedly said he did not find the seal to be racist.

Frank’s stance angered protesters students such as Red Nation organizer and PhD candidate Melanie Yazzie, who declared, “Bob Frank, you have blood on your hands! We are going to keep holding this university accountable until it concedes to our demands,” Liberation News reports.