Given “discriminatory,” one might think the messages were racial or identity-based slurs. But according to The Racquet Press, the chalkings merely were politically conservative in nature.

The first hate/bias report complained about the chalkings “UWL college republicans,” “UWL backs the blue” and “If she breathes, she’s a thot ratatatatot.” The student noted these messages “felt like an attack on [their] identity and presence on campus,” and suggested the last phrase “could be a slight towards the Black Lives Matter movement signs that say, ‘I can’t breathe.’”

The chalking prompting the second complaint was “Trump 2020”; however, this student also added complete hearsay to their report, noting “from what I was told” there were other — racist — chalkings adjacent to the campus’s Hoeschler Tower which read “China did this” and “UWL Backs the Blue.” 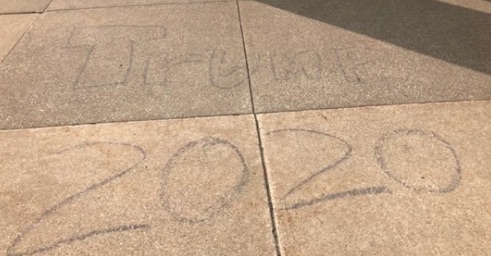 At this point, Racquet Press “social justice reporter” Melissa Touche feels the need to remind us that white supremacists have made use of the Trump slogan “Make America Great Again.” She also repeats the debunked ad nauseam claim that Trump referred to these folks as “very fine people.”

As for the final hate/bias report:

The third anonymous student said they were scared after seeing the chalk drawings. “When I saw the ‘Trump 2020’ and ‘UWL backs the blue’ chalking on the sidewalk, I immediately felt fear. As a person who holds multiple marginalized identities, I understand how important it is to know that there are people out there who will support and stand in solidarity with me,” they said. “The Trump 2020, UWL backs the blue, etc. messages definitely did not make me feel safe. Quite the opposite, actually.”

In an attempt to change the rhetoric, other UWL students wrote positive social justice affirmations such as, “you are on indigenous lands” and “Black Lives Matter” in an act of counter-protest.

In response to this utter nonsense, perhaps some conservative students can file their own bias reports complaining about how “Black Lives Matter” and “you are on indigenous lands” make them feel unsafe. The violence in progressive enclaves such as Portland, Seattle, and New York is sufficient backing evidence, is it not?

These student also should include “what they were told” about other alleged chalkings containing “threatening” overtones. Just to be fair.