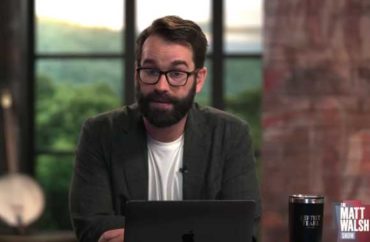 University says if it was going to investigate TA, it’d treat her as a student

University of Wisconsin-Madison officials have remained largely quiet about any potential actions they plan to take against a teaching assistant who tore down posters that promoted an event with Matt Walsh titled “What is a Woman?” the same title of a movie he made.

The film, produced by the Daily Wire’s Matt Walsh, is critical of transgender ideology, which argues men can become women and women can become men.

Jesikah Leeper, a TA for the Gender & Women’s Studies Department, told The Badger Herald she tore down about 40 posters ahead of the October 24 event, which prompted a major protest on campus.

Yet more than a month since this admission, the university has not said if it will take action.

“When we receive a bias report or report of possible student misconduct, we review it and follow up, if appropriate,” communications director Kelly Tyrell told The College Fix on November 21. “We’re not able to share more information due to federal student privacy laws.”

Leeper said she filed a bias incident report against the event, telling the student paper that allowing the event went against the university’s support for “diverse opinions.” She said the event was a “targeted act of hate speech.”

She did not respond to a request for comment on the bias report and tearing down the posters.

Leeper is a graduate student in the law school and the women’s studies department, according to her LinkedIn. She is a former employee of Planned Parenthood.

When asked why Leeper is being treated as a student and not an instructor, Tyrell said she is “a student teaching assistant.”

The university declined to address questions about a letter that Young America’s Foundation, which helped put on the Walsh event, sent calling for an investigation into Leeper.

In the Oct. 24 letter, YAF’s general counsel demanded an investigation of Leeper’s actions, contending it was unlawful misconduct. A subsequent November 7 follow-up was also ignored, according to YAF.

“The University of Wisconsin-Madison acknowledged receipt of Young America’s Foundation’s demand letter, but has yet to demonstrate any effort to fulfill our request for an investigation into Ms. Leeper’s egregious violations of our students’ First Amendment rights,” YAF spokesman Nick Baker told The College Fix.

He confirmed on November 23 there are no further updates.

“If the university is committed to free speech, justice, and unbiased enforcement of university policies, the university must take immediate action to investigate Ms. Leeper,” Vice President and General Counsel Victor Bernson wrote in the demand letter.

In addition, in light of this unlawful censorship, we demand assurances that the University will immediately educate its staff regarding the value of free speech and the University’s obligation under the First Amendment to refrain from censorship–not to mention its obligation as an institution of higher learning to promote the free exchange of ideas, not merely refrain from censoring them.

On November 7, YAF sent a follow up letter to University of Wisconsin-Madison, asking what steps the university has taken to investigate the vandalism and what measures the university is taking to ensure teachers and administrators understand and respect the first amendment rights of students.

“Now, YAF also demands you investigate the widespread malicious destruction of YAF’s posters prior to the Matt Walsh event,” wrote attorney Madison Hahn in the follow-up letter to the university.

Editor’s note: The article has been updated to clarify that Matt Walsh was speaking on campus.

MORE: Gender studies may get the ax at Massachusetts community college