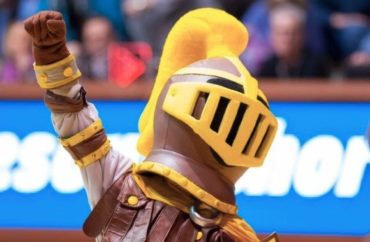 When Valparaiso University Interim President Colette Irwin-Knott announced last week that the school would be ditching the Crusader as the school’s mascot, administrators likely thought it was the end of a long process.

But it may have been just the beginning.

Soon, parents and other observers took to the school’s Facebook page, complaining that college leaders had given in to politically correct influences in ditching the religious mascot.

After nearly 1,000 comments were posted, Valpo Associate Dean of Students Carrie Whittier announced that she would be shutting down comments on the post regarding the mascot change, instead giving parents and other interested parties an email address they could use to send comments privately.

The decision to change the mascot was made last week after what the school called a “decades-long debate” that has “intensified during the past several years.”

“The Crusader imagery related to the Crusades has been embraced and displayed by hate groups including the Ku Klux Klan,” said Irwin-Knott in her announcement.

The interim president said administrators issued a survey and received approximately 7,700 responses from campus community, alumni, and friends of the university.

“In light of this feedback and the negative associations to religious oppression, violence, and hate groups, the task force determined the Crusader is not reflective of Valpo’s mission to promote a welcoming and inclusive community,” Irwin-Knott stated in her announcement.

Yet Valparaiso has refused to release the results of the survey responses and no school representatives have addressed how many survey participants supported the name change.

The College Fix attempted to contact five staff members in the school’s administration and none of them responded to questions Monday and Tuesday.

The makeup of the survey is one of the issues that continues to boil over in a private Facebook group intended only for parents of Valpo students. The College Fix has obtained screenshots of the comments.

“I’d like to know the results of the questionnaire set out,” wrote one parent. “Or is this interim president doing something ‘woke’ for some type of approval?”

In the private group, which is unaffiliated with the university, some parents debated the merits of the name “Crusaders,” with some arguing the name has a positive connotation.

“I believe the most common view of ‘crusader’ is someone who stood up for what is right — particularly in religion and social context,” wrote one parent.

Others noted the hefty cost of changing the school mascot given Valpo has recently closed its law school and cut faculty salaries to deal with financial challenges.

Last year, in a response to the COVID-19 epidemic, the school imposed a permanent five percent salary reduction to faculty members making over $50,000, and furloughed 154 full-time and 46 part-time employees.

“From a purely financial standpoint, can Valparaiso even afford this?” asked one parent about the cost of the mascot change,” adding, “how does this help?”

“Apparently our tuition increase will be going towards changing the mascot instead of improving the campus and education,” one parent wrote.

Not all the participants in the parent group were against the mascot change.

“If it can be associated with hate groups and the KKK and others have perceived it that way with violence and religious oppression, then I certainly support the change,” wrote one parent.

“I do know kids who play sports who might not pick a college if they don’t want to wear a mascot they think is racist/violent etc.,” said one commenter, adding, “Even if they are incorrect.”

In the interim president’s statement last week, the school indicated it would be forming a committee to consider a new mascot and nickname.

But that hasn’t kept the Valpo parents from suggesting new alternatives.

“Short of animals (Bears, Lions, Mustangs, for ex) one could find something negative about any mascot,” complained one parent.

“You can find bias in animals as well,” answered another commenter, suggesting the school rename itself after a color, like the Stanford Cardinal.

Over at the official school account, which suspended comments, the reaction was far cruder, with Facebook users blaming the mascot change on a “complete Islamic takeover” and “cancel culture.”

“Way to bow down to the woke crowd,” wrote one commenter, adding, “You are beyond worthless.”

“Good luck finding any alumni wanting to donate money after this fiasco,” said the commenter. “But don’t stop there. Make sure to pull down all sports banners, pictures, retired jerseys, and book store merchandise. Have a big ol’ bonfire to wipe out that mean Valpo Crusader history.”

As the next school mascot, the commenter suggested the “Valpo Vaginas.”

In changing the nickname away from “Crusaders,” Valparaiso is following a number of other schools, including Idaho’s Northwest Nazarene, Pennsylvania’s Alvernia University, Pennsylvania’s Susquehanna, and Wisconsin’s Maranatha Baptist.