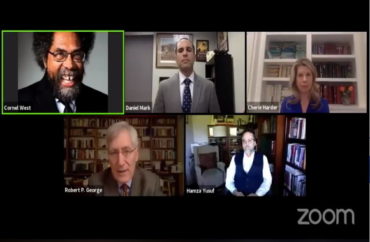 Provides an opportunity for prayer and reflection

In the era of the coronavirus quarantine, religious services around the world have been canceled in an attempt to mitigate the spread of the virus. But on Wednesday, Catholic, Protestant, Muslim and Jewish scholars of religion provided guidance for quarantined faithful.

“Communities of Faith and COVID-19,” a virtual discussion hosted by The Trinity Forum and Baylor University, examined “how believers and religious communities can thrive during this extraordinary season and contribute to America’s common good.”

Each sought to present a religious context for the disease crisis facing the world, emphasizing the need for religious faith especially in times of great strife. They said that social isolation provides a unique opportunity for spiritual and intellectual growth.

“Science addresses the how, religion addresses the why,” Hanson told the 2,000-plus viewers on the livestream. A prominent Muslim scholar, Hanson serves as the president of Zaytuna College, the first accredited Muslim liberal arts college in the United States.

Princeton’s George, also the namesake of a faith and ethics center at Baylor University, sought to explain how a world created by an all-good God can contain such rampant suffering.

But suffering can be redemptive, George added:

But while the scholars began by discussing the trials and tribulations associated with forced quarantines, they agreed that the “stay at home” mantra is a major opportunity for people.

“I think one of the things about these situations is you really see the best and sometimes the worst of humanity,” Hanson said. “People talk about the social isolation, but there’s actually a lot of collectiveness that’s happening now. People are calling people they haven’t called in a long time.”

People can be “spiritually closer to each other” in the midst of physical distance, George said. “At a time of such polarization, when citizens are not treating each other as fellow citizens but as because of their political disagreements, maybe it’s not a bad thing.”

He hopes that “a good that will come out of this is a little more spiritual closeness, even across the lines of political or ideological division.”

The topic of social isolation saw the three non-Catholic scholars draw from the Catholic traditions of hermitage and monasticism.

Hanson alluded to early Church fathers who deliberately sought isolation, living in caves in Egypt to flee the world to be closer to God.

“I think there are a lot of blessings that will come of this,” he said, recounting how the air near his home had gotten substantially cleaner since the beginning of social isolation.

Citing the Catholic English author G.K. Chesterton, Harvard’s West spoke about Saint Francis of Assisi, the founder of a medieval order of monks. “His isolation would go hand in hand with his profound sensitivity to the suffering of creatures and human beings,” West said.

Unlike monks, though, “we’re in a situation where our isolation is not chosen,” he continued:

We’re in a moment of such spiritual decay and moral deterioration, with the greed and the indifference and corruption running amok everywhere we look… . Hence the need for more [spiritual] fortification.

Villanova’s Mark found his inspiration in a contemporary source: Robert Sarah, a Guinean cardinal of the Roman Catholic Church, who wrote the book “The Power of Silence: Against the Dictatorship of Noise.”

“For those of us who are healthy with resources, I think it is worth taking the opportunity for us to reflect on how silence can be a good thing, how silence can be a blessing,” Mark said. Citing Sarah’s book, he said “God is not the thunder or the earthquake, God is the still small voice”:

In response to a question about book recommendations, Hanson recommended the great literary accomplishments in human history, such as Herman Melville’s Moby Dick. The other scholars added Shakespeare, Tolstoy and Dostoevsky as good reading material.

West said he has been listening to classical music by Beethoven and Tchaikovsky, and George encouraged people to learn a new skill, such as how to play an instrument by watching YouTube instructional videos.