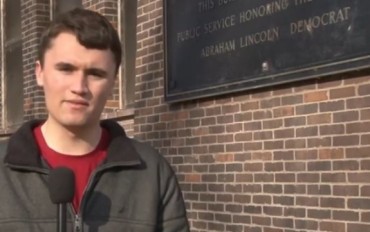 Students at a public university in Illinois, the home state of arguably the most famous and influential president in American history – Abraham Lincoln – can only guess whether the 16th president was a Republican or a Democrat.

The video was filmed Friday near a historic building that’s part of Northeastern Illinois University in Chicago, a structure that includes a plaque that labels Lincoln a Democrat. Installed in 1905, the plaque states: “This building is dedicated to public service honoring the memory of Abraham Lincoln   Democrat.”

Lincoln was a Republican.

The two-minute video shows a parade of students at the university who, when asked if Lincoln was a Republican or Democrat, hesitate, grin, turn sheepishly away from the camera, and say I don’t know. And when they take an educated guess, many answered Democrat, while some said Republican.

Watch and see just how much today’s students know about Lincoln: